Cleaning: SM
It Came Upon A Midnight Clean

As the “guy with the rolling keyboard,” Mike Huffman brings lots of joy to people living in senior communities, especially during the holiday season.

Mike, who is a senior production designer for Direct Supply of Milwaukee, is also a musician. For many years, he worked as a professional entertainer, putting musical shows together for cruise ships, traveling with Broadway touring productions and performing in a lot of regional theatre productions. Among his current musical pursuits, Mike writes and performs a variety of one-man shows for senior living communities, most recently a show featuring big band music. 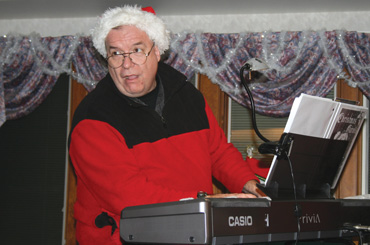 A few years ago, Mike initiated a caroling program that blends his love of music, the holidays, his colleagues and the end users served by Direct Supply.

“It has escalated into an annual tradition that we’ve now been doing for seven years,” says Mike, who is also the group’s musical accompanist and director.

The 15 to 20 carolers perform at senior communities in the Milwaukee area during the holiday season.

“People from all departments participate, and, through the caroling, we reach out and touch people. For us, it sets the tone for the season,” says Mike.

Some of the places they perform are huge, including one that is 23 acres — that’s where the rolling keyboard comes in.

“I have a digital piano attached with Velcro to a rolling cart, and use a battery pack for power,” says Mike. “We roam through the communities, often singing to people who don’t get out much and who don’t otherwise see a lot of people.”

After performing, the carolers reach out to the audience members as they depart, shaking hands and dispensing hugs. Mike and the singers have a soft spot in their hearts for their audiences in the senior communities.

“Being Milwaukee, a lot of our partners know the German words to ‘Silent Night,’ so we perform the German version,” he says. “It is touching to see what an impact it makes on many people. It really takes them back and reminds them of their traditions.”

In some of the residences, occasionally people who are otherwise uncommunicative will sing along to the old songs they know.

“This happens a lot at Christmastime. We see this in memory care units,” says Mike. “It’s very moving and makes it an even more rewarding experience for us.”

The group is adding a series of patriotic-themed performances for the summer. It’s another opportunity to share some love and joy with others.

“Giving my partners an opportunity to experience giving back is a very important thing, and this is a fun way to do it,” says Mike. “You can literally see the positive effect it has on people.”