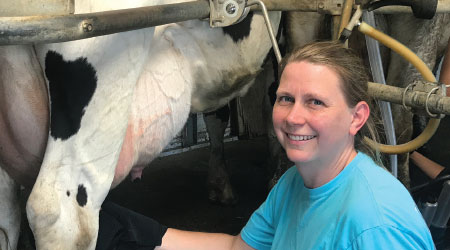 Darlene Rosenbaum, an employee at Sanico Solutions in Christianburg, Virginia, owns and operates a small dairy farm with her husband, Todd

Darlene Rosenbaum is a woman of many talents. She works for Sanico Solutions in Christiansburg, Virginia, where she does “a little bit of everything,” including sales, customer service and accounting. In her spare time, Darlene works on a dairy farm she co-owns with her husband, Todd.

“We milk 60 cows, but actually have over 100 cows, including calves,” says Darlene. “Our farm is small in the realm of dairy farming. The average dairy farm in the United States has more than 200 cows.”

Darelene’s foray into farming began at a young age. When she was 12 she raised calves — even bottle-fed them — through 4H, a national hands-on learning program for youth. Her family raised beef cattle as a side business and she worked on a dairy farm throughout high school. She enrolled in an agricultural program at a two-year college, then transferred to Virginia Tech where she majored in dairy science.

After college, Darlene managed a dairy farm, while Todd worked as a state trooper. When their first-born daughter started school, they needed a more flexible schedule, so Darlene started working at Sanico as the company’s accountant and Todd moved into Darlene’s job as dairy farm manager.

Now, the two own and operate their own dairy farm.

“Todd had worked on multiple farms earlier in his life, and for a long time had wanted to return to farming,” says Darlene. “When this farm became available because the previous owner was retiring, Todd stepped right in to take over the farm.”

The cows, which are fed from crops grown on the farm, are milked twice a day at 3:30 a.m. and 3:00 p.m. The milking, which is fully automated, takes about three hours.

“We milk six cows at a time, and never touch the milk,” says Darlene. “There is a milking system that goes from cow, to pipeline, to a filtering system, then to the milk tank. It ultimately goes to the dairy via a tractor trailer-sized tanker truck. The truck backs up to the barn, pulls samples to identify fat content (dairy farmers are paid by fat content) and then the milk is weighed. The milk, which is kept at 38 degrees during the entire process, gets pumped directly into the tanks to be driven away and sold.”

In addition to getting up at 3:15 a.m. on the weekends to help Todd with the farm, Darlene does the farm’s accounting and record-keeping in the evenings. Their four kids, ages 5 to 16, help out after school and on weekends.

What Darlene enjoys most about dairy farming is that she gets to be outdoors and does the farming with her family.

“I don’t enjoy getting up at 3:15 in the morning, but once you’re there with the cows, it’s nice,” says Darlene.