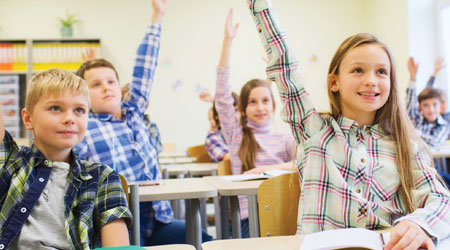 The health of a school building is a big factor in the health of the students and staff that occupy it. Studies have shown that student success can be directly affected by the school environment. That’s not surprising, because by the time a student graduates high school, he or she will have spent more than 15,000 hours in school, second only to the time they spend at home.

A child’s time in school is also a time of critical physical growth and development. Medical research confirms that children are more susceptible to indoor air pollution, mold and other pollutants during these formative years. And, their behavior exposes them to more environmental threats because they’re unable to protect themselves from hazards.

Green cleaning products are less toxic and potentially less dangerous for children with asthma, the most common chronic disease among children, according to the U.S. Centers for Disease Control and Prevention. Controlling exposure to dust, pollen and other irritants could prevent two-thirds of asthma cases in elementary school children, based on a report from the “American Journal of Respiratory and Critical Care Medicine.” That is one big reason why states have begun to enact green cleaning laws for schools.

Since 2005, 10 states (Connecticut, Hawaii, Illinois, Iowa, Maine, Maryland, Missouri, Nevada, New York, and Vermont) and the District of Columbia have implemented laws that address green cleaning in schools. Although these laws have been around for some time, not much analysis has been done regarding how well they are working.

The Center for Green Schools at the U.S. Green Building Council decided to investigate, seeking information from state officials, along with research and data from a national survey they undertook. The result was a white paper titled “Perspectives On Implementation And Effectiveness Of School Green Cleaning Laws.”

“The report showed that laws perceived as most effective tended to include reporting requirements and mandates, rather than simply encouraging implementation of green cleaning,” says Anisa Heming, director of the Center for Green Schools, U.S. Green Building Council, Washington, D.C.

The need for school-focused education about the purpose and requirements for green cleaning was also identified as critical, including not just training but broader awareness of green cleaning among school boards, administration, faculty, building maintenance staff and the greater school community.

Just three states — Iowa, New York and Connecticut — maintained quantifiable data on their laws’ successes. This data shows that schools were compliant with the legislation, suggesting that not only are schools interested in adopting green cleaning products and practices, but want to do it well and quickly.

“The bottom line is we need more data and better reporting,” says Heming.

Students aren’t the only school occupants reaping the benefits of a switch to environmentally friendly cleaning products. Green cleaners are also safer for use by custodial workers. Conventional cleaners can pose safety risks, especially from injuries like chemical burns to eyes and skin, which costs millions each year in lost time and workers compensation. Certified green cleaners cannot be corrosive to skin or eyes.

Teachers, too, are subject to a higher prevalence of asthma compared with other non-industrial occupational groups, according to Harvard’s Schools For Health study. A survey of 500 teachers in New York found that teachers experiencing symptoms like headache, allergies or sore throat were more likely to report having classrooms with dust, mold or moldy odors.

next page of this article:
Barriers To Implementing Green Cleaning Products