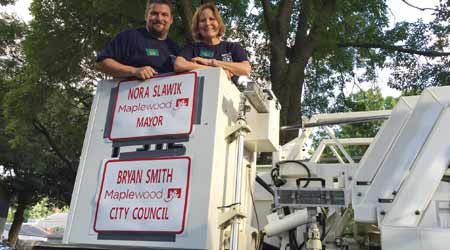 Bryan Smith (left) and Mayor Nora Slawik are part of the city council that represent the residents of Maplewood, Minnesota

In his freetime, he is known as “The Honorable Bryan Smith.”

Bryan, senior marketing manager - Americas for Tennant Company in Minneapolis, is a member of the city council for Maplewood, Minnesota. He spends 20 to 40 hours each month in his role as one of five council members — which includes the mayor — that represent the 40,000 residents of Maplewood.

“I’ve been involved in politics in some way since college,” says Bryan. “I interned with a local lobbying firm, did an internship in the Clinton White House press office in 1997, became an intern for Congressman Martin Sabo, and then served as field director for Congressman Sabo’s campaign in 1998.”

Even with all the chatter related to another White House intern at the time, Bryan knew he loved politics.

So he worked in sales, followed by marketing, and then earned his MBA.

Bryan and his wife Jennie moved to Maplewood eight years ago, and connected with the city’s mayor who lived three doors down from them.

“We got to know her as a neighbor,” says Bryan. “She suggested that I run for office.”

Jennie, who has always said that Bryan should run for office, encouraged him to do it. Elected to the Maplewood council in 2015, Bryan says that campaigning was tough. He spent countless hours knocking on thousands of doors across the entire city, as well as $15,000, half of which was fundraised. But all the hard work was worth the effort.

“At the city level, we can make a real difference for people. It’s not a lot of ‘highfalutin’ policy,” says Bryan. “It’s fixing roads, making parks beautiful, and encouraging businesses to locate in our city. It’s great to vote for a roads project, and then have the privilege of driving on a new road that makes life better for our residents.”

Bryan is most proud of helping to create a “Use of Force” work group, which ultimately became the “Policy Advisory Commission,” a permanent, collaborative group. Following the high-profile police shootings in Baton Rouge, Louisiana, and Falcon Heights, Minnesota, ​in July 2016, Bryan was the catalyst that established this group of 12 police and community members to review and make recommendations for changes to the Maplewood police department’s “use of force” policies and training protocols.

“This group focused on how we talk about the realities of policing, the realities of race, and ways we can foster communications,” says Bryan. “These topics are difficult, messy and complicated. I’m confident that if a tragedy occurs in our city, we’ll have a group of people who will stand with our police officers and know how to talk about it together.”

Bryan appreciates how his freetime position enhances his life, including his business career.

“A council member’s role is to be a leader, not a manager,” he says. “It’s helped me to be more diplomatic and a better listener.”