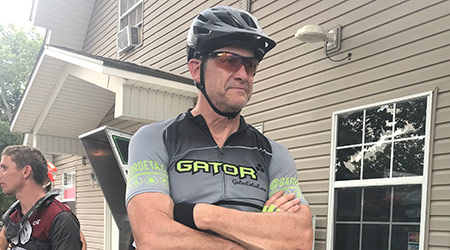 Randy Bowers enjoys the freedom and exercise mountain biking gives him, as well as the friendships it develops

Two years ago Randy Bowers was about 50 pounds overweight and bored. That was until he and his wife came upon some off-road bike trails.

"I can remember the instant that I said, 'Oh, I like the idea of this!' Soon after, I bought my first mountain bike, and now I'm passionate about the sport," says Randy, account manager for VCC Janitorial Supply in Bossier City, Louisiana.

Mountain bike trails are off-road, narrow and bumpy with loose terrain and lots of curves, ascents and descents. Designed for one rider at a time, the trails are not paved. The trails could be mud, sand, hard clay, pine straw or adjacent to big drop-offs. In some locations, riders cross a lot of streams so they might be in two inches of water. One thing is for sure: all mountain bike trails require a lot of energy and concentration.

"At first, I didn't know what to expect," says Randy. "Someone once said that if you're not in pain while you're mountain biking, you're probably not doing it right. I've introduced a number of people to the sport, but the majority haven't pursued it, and I think that's because it requires so much effort."

As a "Category 3" rider (meaning that he's a beginner), Randy rides five to six days per week which equates to 100 to 150 miles.

Even though he's new to the sport, Randy has already won first-place trophies in two mountain bike races: The Acadiana Classic, in Lafayette, Louisiana, and the Dust n' Bones in Brookhaven, Mississippi.

"Shockingly somehow I won," he says. "The first time I won a race I was hooked and racing has become somewhat of an obsession for me." Randy races in the age 50 to 59 category.

"Sometimes, though, they expand the age categories if there are smaller groups," says Randy. "I've raced against a guy who was 82. He was there to enjoy it and have fun, not to win the race. That's what I want to be doing when I'm 82."

Even though things can go wrong, such as mechanical troubles with the bike and accidents — Randy broke his collarbone and five ribs during an endurance race — he thoroughly enjoys the thrill of mountain biking.

"There can be moments of sheer terror on a descent, or prolonged periods of agony when you're making an extended climb, (but) I really enjoy the freedom, the health and fitness aspects, and the camaraderie of mountain biking," says Randy. "I feel like when I finish a ride or race that I've done something positive for my health. And the people are wonderful."