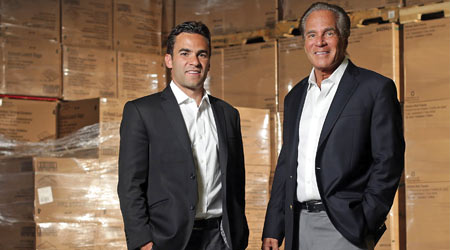 Mergers and acquisitions are en vogue within much of the commercial cleaning industry. Company after company announce moves big and small each week and jan/san distributors are very much a part of this cohort.

One of the more aggressive distributors is Imperial Dade, whose philosophy of being opportunistic has yielded more than a dozen acquisitions since 2009.

Imperial Bag and Paper started business in New Jersey in 1935. Its founder, David Katz, desired to build a company that offered the best products, at the right location, at a fair price, at all times. Katz maintained this mantra until he sold the company to employee Michael Nash, who upheld it until 2007, when he sold the company to current CEO, Robert Tillis.

Prior to his purchase, Robert owned and operated a paper bag manufacturer, but began eying industries he thought provided a more promising outlook. He felt it was hard to be nimble in manufacturing. Distribution, on the other hand, gave companies the flexibility to adjust to the changing needs of customers.

“When NAFTA (the North American Free Trade Agreement) opened up, there were goods coming in from offshore,” says Robert. “Manufacturing was becoming more challenging and there was an opening in distribution.”

After purchasing the venerable Imperial Bag and Paper, Robert had to decide if he wanted to maintain the core values established by Katz. The choice wasn’t hard. Robert opted to run the company on its base principles, as well others that had been established — the company would always put great care into the success and happiness of its employees, which would motivate its employees to deliver their best work.

All In The Family

With an experienced business owner at the helm, Imperial Bag and Paper already had its leadership in place. But complacency doesn’t run through the Tillis bloodline. After just a few months of ownership, Robert convinced his son Jason to join him.

Jason Tillis graduated college in 2005 and spent no time mulling his next big journey. He owned and built up a company, but chose to sell in 2007. He then opted to work for Imperial Bag and Paper that summer for what was expected to be short stint leading a special project involving client Party City, a retail chain of party supply stores throughout the United States.

Jason enjoyed himself and stuck around for more than the special project. Since he liked learning the ins-and-outs of the various aspects of the company, he spent time moving around, trying new things and meeting new co-workers and industry professionals. Then, in 2011, Jason led the charge on Imperial Bag and Paper’s biggest acquisition to that point.

In September of 2011, Imperial Bag & Paper purchased Burke Supply Company, a metro-New York distributor of janitorial supplies, paper goods, safety supplies and industrial packaging. At the time, Robert said the addition of Burke would help Imperial Bag & Paper Company to provide more products and services, while increasing distribution solutions for customers — three things that are very important to the business.

The Burke operation was doing approximately $80 million a year in revenue at the time and had a really solid janitorial presence. The move was also very strategic as it pertained to location, with Burke’s workers eventually being brought into the Imperial Bag & Paper Company’s New Jersey headquarters.

After closing the Burke Supply deal, Jason’s talent and dedication were apparent. So much so that he earned a seat beside his father as the company’s new president.

The father/son working relationship was strong from the start because of how it has been constructed. Robert says the partnership of the two was a “dynamic evolution.” Robert and Jason practice strong dialogue when larger decisions are involved. But when it comes to the day-to-day grind, Jason says Robert is unique in that he gives him a lot of room to work with other members of management, trusting Jason and his co-workers to make the right call.

“I think I was fortunate to be able to create my own path,” says Jason.

As the environment evolves, Jason and Robert continue to work collaboratively on some business ventures — like acquisitions — and act independently on others. The process the Tillises use to determine which member will lead what project is quite simple: select the man with the most experience and expertise in that subject.

For example, the first project Jason took on was heavily involved in technology because he was more comfortable with that aspect of the business than Robert. That worked, so Jason has continued to have his fingers at the pulse of the company’s technological state and future.

next page of this article:
Serving Jan/San Customers Through Business Expansion