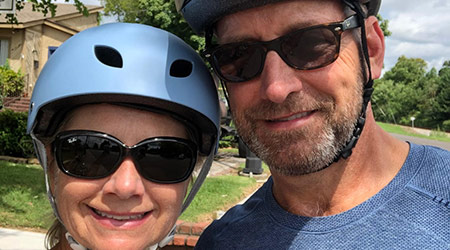 Ken Bodie, 2020 ISSA president and CEO of Kelsan, Inc., with his wife, Lisa

Professionally, Ken Bodie serves as the CEO and president of Kelsan, Inc., in Knoxville, Tennessee, as well as the ISSA president for 2020. In his freetime, however, he's a fitness enthusiast.

In an effort to get into better shape, Ken started running in 2009 — his chief goal was to run a marathon. Since then, he's run several half marathons and a few full marathons, the most recent of which took place in 2019.

Since that time, Ken has hung up his running shoes and joined his wife, Lisa, who is "a serious hiker," on the trail. It was an easy transition, since the couple lives only an hour from one of the most popular National Parks in the country. The Great Smoky Mountains National Park features roughly 150 official hiking trails, enough to keep Ken and his wife very active.

"I find hiking to be easier and more beautiful than running," says Ken. "The beautiful views are the reward for hiking in the mountains."

In addition to some breathtaking scenery, Ken and Lisa often see an array of wild animals, including black bears. He says the experience of seeing a momma bear with her cubs can be both exciting and frightening.

During the pandemic, hiking has been the perfect freetime activity for Ken and Lisa. They vary their trips between five and 10 miles long and keep a regular schedule. COVID-19 or not, Ken says they will keep on hiking, as it's a great way to reduce stress.

Hiking is not all that Ken and Lisa are doing during the pandemic. They're doing some bicycling, too.

"Knoxville has some great greenways. It's nice to think that we can ride downtown on a bicycle instead of driving in a car," says Ken. "We've been biking for a while, but even more so during the pandemic. For us, it's a 20-mile roundtrip to downtown. We bike, have lunch and shop at the farmers market. We carry the vegetables home from the farmers market in our bicycle baskets and enjoy them for dinner."

The pandemic has changed much more than Ken's freetime. It's made his ISSA presidency unlike any other.

"I'm the first ISSA president to have virtual board meetings and virtual ISSA shows," he says. "After getting input about this year's North American ISSA Show, the results showed that more people would rather have the 2020 show be virtual versus in-person. In the end, even though we believe an in-person show is especially important because of the COVID-related technology and training that people need, we felt it was in the best interest of members and participants to have a virtual show this year."