How To Make Your Business Stand Out 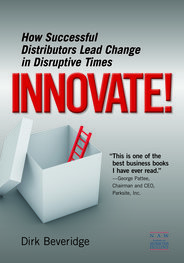 The following is an excerpt from the book “Innovate! How Successful Distributors Lead Change In Disruptive Times” by Dirk Beveridge. It comes from chapter 1, A Call For Innovation. Beveridge explains that there are four key issues affecting business today that can create four forms of “inherent inertia” that will keep companies from moving forward. The following excerpt explains Impact No. 2: Non-differentiated Businesses and the inherent inertia it causes.

Over the years, distributors who locked into the status quo would conclude that the business of distribution was that of buying in bulk, breaking that bulk into smaller orders, and delivering those orders across town. Today, however, many distributors are coming to the conclusion that the old style of distribution — being the sole provider of logistics and information — no longer provides the differentiation it once did.

One distribution CEO put it this way: “In distribution, it used to be with products and then when that became sort of leveled out it got to be facilities. So number of locations, more product, more facilities, more reach — so you had to innovate yourself more not so much for the customer but more for the manufacturer so you became desirable. Now that has been kind of neutralized because now everybody has enough stores to satisfy the manufacturer and there are not any new markets to put locations.”

In the past, distributors could look to differentiate by providing the stocking, picking, packing, shipping, receivables, and doing a lot of high-transaction activities that suppliers did not want to do and in which customers expected high degrees of efficiency. Over time, these basics of distribution and their outcome of complete orders, on-time delivery, and accurate invoices became table stakes as opposed to differentiators.

“The bar of expectations for logistics keeps getting raised by companies like Amazon that are investing ever more into the next-generation technology. But beyond the logistics part, the expectation of the time it takes, the efficiency of it, the consistency of service, the availability 24 hours a day, the ability to [make] returns [with] no questions asked — all these things that Amazon and their competitors in the retail space [do] that people get used to and are looking for…it’s very hard for distributors to invest in creating a similar online experience, while still providing the personalized, local service customers expect for their more complex and immediate needs.”

And although logistics is no longer a point of differentiation, the same is happening for distributors’ second traditional form of differentiation: the providing of information. As the representative of the products and brands they carry, historically distributors were able to differentiate themselves as the keeper of that information. Those that needed to understand what the features were — the fit, form, and function, the applications, and what the benefits of those products were — needed to come to the distributor.

But today the Internet is much more efficient at providing all of the information a user needs. Customers can do their own research around products and what they want. No longer do they rely on distribution to answer the question: which products?

Ultimately, that which once differentiated no longer does so. And as we have been pulled to the status quo leading to this lack of differentiation, distributors are also finding themselves in inertia No. 2: trapped in a world of sameness.

Inherent Inertia 2 — Trapped In A World Of Sameness

At an IBM cloud conference in Las Vegas, Lance Crosby, CEO of SoftLayer, IBM’s cloud company, said of their cloud strategy, “IBM will have a follow-me portfolio, not a me-too portfolio. IBM is not a ‘me-too’ company.”

In other words, many distributors are following rather than leading; they are emphasizing ways in which they are the same as their competitors instead of how they are different. The challenge is that when everybody says and does the same thing, nobody listens. And maybe more importantly, nobody is prepared to pay what we believe we are worth.

One CEO used the example of FedEx and UPS: “Why does FedEx get $2 more overnight than UPS? Because they have created that it is guaranteed right. Well, in our business, as hard as we work on our people and our product and all that stuff, we can never seem to get to the point where the customer sees us as being different and that we are worth more.”

Interestingly, Xerox found itself in a similar situation in 2012. Jeannine Rossignol, vice president of marketing communications for U.S. client operations, led an effort to review the messaging of the division’s competitors. And what they found, when they displayed the value propositions of all the companies in the space side by side, was that they all looked exactly alike. In fact, the team found that if you removed the names and logos, you couldn’t tell them apart.

If most distributors were to do the same, I suspect they would come to the same conclusion as Ms. Rossignol.

“Innovate! How Successful Distributors Lead Change In Disruptive Times” is published by the National Association of Wholesaler-Distributors (NAW). To read more, the book is available to order at www.naw.org/innovate.