This is the first part of a four-part article about how distributors can help their customers compost.

Back in 2011, one of Marsden Bldg Maintenance LLC’s biggest markets, the City of Minneapolis, passed an ordinance mandating recycling programs for all businesses, workplaces and houses of worship.

“This ordinance gives recycling the normal, routine status it deserves. Now it’s up to all of us to do our part to recycle,” said Mayor R.T. Rybak in a statement released at the time.

Mike Kilsdonk, Marsden’s safety, training and sustainability manager, had a different take: “I thought it was already law,” he says. “I guess it was already a good idea, but it wasn’t a law.” 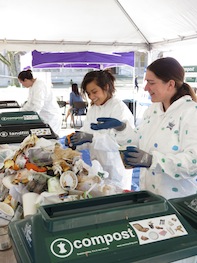 That’s the future Kilsdonk envisions for composting, the process of diverting waste — mostly food waste, but not exclusively — from landfills and allowing it to decompose into soil amendment. He admits composting may take years, or even decades, to become law. But, similar to the evolution of recycling, sometimes economics and public opinion outpace politics.

Right now, due to the sheer volume of food waste, composting makes most sense for some of the St. Paul, Minnesota-based building service contractor’s larger clients, such as Target Field, home of Major League Baseball’s Minnesota Twins, and TCF Bank Stadium, home of the University of Minnesota football team. But a dozen or so other clients, many located in traditional office buildings, are also getting in on the ground floor.

Demand for composting from businesses like these has forced the hand of waste haulers in the Minneapolis and St. Paul metro area, as well as across the country. All of the major waste haulers in the Twin Cities now pick up compost in addition to recycling and landfill waste, says Kilsdonk.

And since composting efforts often involve a client’s building service contractor or in-house cleaning staff, there’s a place at the table for jan/san distributors as well.

next page of this article:
Add Composting To A Building's Sustainability Program