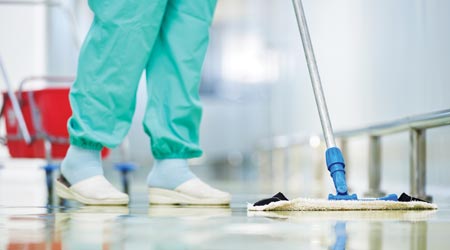 At any given time, about 1 in 25 inpatients contracts an infection while staying in a hospital, leading to the loss of thousands of lives and cost to the U.S. healthcare system of billions of dollars each year. The devastating financial, medical and emotional consequences of healthcare-acquired infections (HAIs) have the industry searching for answers.

Make no mistake, most hospitals prioritize cleanliness. They may even exceed infection-control guidelines by doing things like replacing curtains between patients or cleaning the rooms of infected patients more than once a day. Unfortunately, it turns out this is not enough.

Countertops are the surfaces that typically have been studied for contamination. But substantially less has been said about some other surfaces … until recently. The idea, with some studies to back it up, that hospital floors are a source of bacteria that lead to HAIs has become a subject of concern.

Most hospitals previously ignored floors as a potential source of HAIs, but this may not have been a smart decision, as pointed out by the 2017 report titled “From The Floor Up,” compiled by Jack McGurk, a medical waste consultant, and co-author David Harry.

The report states, “Floors have the potential to return to pre-disinfection bacterial levels within several hours after mopping. Pathogens are consistently introduced to the floor throughout the day by shoes, transport equipment such as wheelchairs and beds, treatment devices or computer carts, and non-slip patient socks that traverse the floors and frequently, directly into a bed. More importantly, there is a consistent potential for cross-contamination on and across the floor by an item expected to be clean and often handled without gloves — a freshly laundered mop.”

Writing this report was an eye-opener for McGurk.

“We were looking at HAIs from so many different aspects, but we were ignoring the floors and how they were cleaned,” he says.

next page of this article:
Disposable Mops Cut Down On Contamination