Cleaning: Business & Industry
it's about the ride 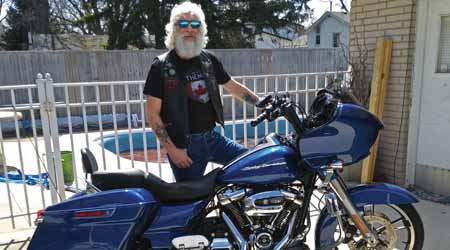 It’s summer, so Bruce Hines can be found eating ice cream on Thursday nights after a 100-kilometer motorcycle ride with other members of his motorcycle group, the Windsor, Ontario Rose City Chapter #334 of the Southern Cruisers Riding Club.

Bruce, service manager for Holland Cleaning Solutions in Windsor, Ontario, Canada, has two motorcycles: a 2004 Harley-Davidson Softail Standard, and a 2017 Harley-Davison Road Glide, which he calls his “dream bike.” He occasionally drives the Softail on his 10-minute ride to work, and reserves the more comfortable Road Glide for longer trips.

Inspired to ride by two of his brothers, including his twin, Bruce started motorcycling in 2004.

“It was a life-changing experience for me, especially because I had suddenly lost my wife,” says Bruce. “I think that’s why I got so busy with the club — it gave me something to do. Plus, every time my twin brother showed up on his motorcycle, it made me jealous.”

Bruce started the Rose City Chapter 334 of Southern Cruisers  in Windsor in 2004. The group has a regular club ride every Thursday night from May until October. When they’re not stopping for ice cream during the summer, they have monthly dinners and meet for coffee in the winter.

“I really like Southern Cruisers, because it’s international. Soon after we started our chapter, riders came over from Detroit and joined us for a Thursday night ride,” says Bruce. “Then we started doing a circle ride around Lake St. Clair on the Canada-U.S. border. ... If you’re traveling cross-country in either country and have a mechanical problem, it’s easy to find help from local club members.”

However, it’s not all about riding around for ice cream. The club raises money for charities, including an organization that provides respite services for families with children who are disabled.

“We ran a motorcycle scavenger hunt for five years,” says Bruce. “The scavenger hunts were themed. Riders were asked to find churches in small towns and come back with information such as the year a church was built. Or visit motorcycle dealers to find the price of a bike in a showroom. And even buy and donate certain nonperishable food items.”

He also participates with the Southern Cruisers Rose City Chapter in the national “Ride for Dad” program in Windsor, a fundraising campaign raising awareness of, and support for, prostate cancer research.

For Bruce, there just seems to be nothing better than getting on his motorcycle.

“It’s about the ride, not necessarily the destination,” says Bruce. “It’s hard to put it into words. It’s relaxing. It feels like you’re flying. And you develop instant friendships.”