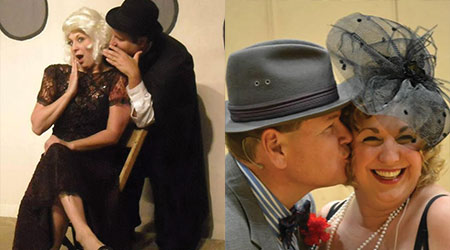 Angela Percassi performs on stage with husband, Peter. Percassi is the business development manager for HOSPECO.

It had always been Angela Percassi’s dream to be on the theater stage, but it wasn’t until her thirties that she got involved. Luckily for Anegla, business development manager for Cleveland-based HOSPECO, the wait proved to be a good thing.

Anegla’s first role was as the adult Wendy in “Peter Pan.” Following that successful debut, she continued to perform with multiple community theater groups. That was until she was drawn to directing after leading a tribute to a local community theater director who died during one of the shows.

“He had written a few murder mysteries, and as a tribute to him, his family and the community, I decided to get a group of people together who were close to this director and we put on a mystery,” Angela said. “We actually made money, donated it, and we kept the murder mysteries going.”

A local high school principal saw one of the murder mystery performances and approached Angela after a show, inviting her to be the director of musicals and plays at the high school. She went on to lead high school musicals for three years and has been involved in theatrical productions for more than 20 years.

Angela’s theater experience also led her to meet her now husband, Peter, who performed in “Peter Pan” with her.

Angela has had the opportunity to play opposite her husband a number of times. One of the most memorable times was when they were sharing the stage and Anegla forgot her lines in “Bye Bye Birdie.”

“Peter and I were doing a duet. I didn’t sing when I was supposed to because I was so wrapped up and enamored by him. I was gazing into his eyes and he whispered, ‘You have to sing!’”

Even though the theaters have been dark during the pandemic, the singing didn’t stop at the Percassi house.

“It’s been tough and we miss the interaction with live audiences,” Angela said. “But we do sing around the house. We sing a lot of the songs from ‘Momma Mia’ and Abba around here. While we’re cleaning up after dinner, I’ll start singing something — I love ‘Dancing Queen’ — and everyone else will join in.”

Angela continued, “I remember when Peter and I first got together, my older daughter and I would laugh because Peter had music from musicals on his iPad, and we said, “Who does that?’ Now we all do that, especially when we’re on a car trip. Performing in theater has been a family affair and it’s been a wonderful, fun, life together.”