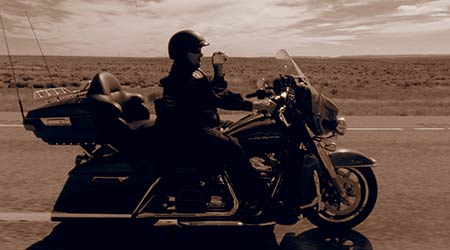 When he’s not busy managing his company or tending to ISSA Board of Director business, you will probably find Steve Lewis on a motorcycle.

Steve — president of Overland Park, Kansas-based Golden Star Inc., long-time ISSA board member and 2021 ISSA president — found his love of two-wheel riding when he got a dirt bike as a kid. Then, when his daughter graduated from high school and went off to college, he bought himself a Harley-Davidson.

“I went home and told my wife, Pam, ‘I bought a motorcycle today,’”Steve recalls.“She reacted as expected and said she’d never get on a motorcycle.”

Fast-forward to today and Steve actually has two Harleys: a 1998 Heritage Springer and a 2014 Ultra Classic touring bike. He and Pam now take weekend motorcycle trips as often as possible.They head to “artsy” towns in the Ozarks in northern Arkansas for long weekends — a mecca for riders and ideal for the dining and museum scene.

Steve also logs shorter trips on a consistent basis. He rides the 1998 bike to work — 35 miles each way — every day that he can.

“One year I didn’t get into a car for a month,” says Steve. Add to that his annual guy's trip. For the past 12 years (except 2020, because of the pandemic) Steve has taken his touring bike on an annual week-long trip, give or take, with eight other guys. The trips are usually around 3,400 miles and take him to different destinations every year.

“In our younger days we’d ride 650 miles in one day. Now we split it up into two days,” says Steve. “It’s the best way to see the country, and it’s great therapy — you just ride along and take in the sights.”

When they’re not on their big trip, the group rides together once a week, weather permitting.

“Last week, we rode a couple hundred miles to get a hamburger,”says Steve.

As he reminisces about the fun of these shorter trips, Steve comments that the longer adventures tend to bring more excitement and unexpected twists and turns. For example, the group once ran into a hailstorm in Montana on their way to Glacier National Park.

“We were out in the prairie and there was nowhere to go, so we stopped until the hail stopped,”Steve recalls. “Then, when we left Glacier for Denver, we went 50 miles in the wrong direction, so we had 100 miles on the odometer before our 350-mile day even began.”

On another trip, they shared the road with buffalo. A different time, they were in Durango, Colorado, and the temperature dropped to 22 degrees when they rode over a pass at an elevation of 10,971 feet. “I put on my long johns that day,” says Steve. “By the time we got to our destination, we were hugging our wood-burning stove.”

Another time, in mid August, the group left KansasCity in 100-degree heat, but soon ran into a snowstorm in Colorado.

“We were headed to the Veterans Rally, but we never made it because the highway was closed to motorcycles,” he recalls.

Steve is unphased by the “surprises” that pop up on a major motorcycle trip. They simply add to the entire experience.

“There is no bad time — every trip I do is the best time. I’ve enjoyed every one of them and I’ve never been down a bad road,” he says. “If someone asks, ‘Where are you going?’I just say, ‘I don’t care. As long as I’m riding, I’m happy.”