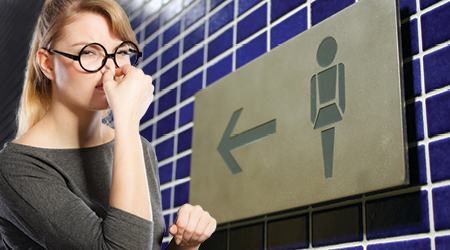 Second only to empty soap and paper dispensers, malodors in public restrooms are a major source of dissatisfaction among building occupants, according to a 2017 Contracting Profits survey on restroom complaints. Even in clean restrooms, bad smells can elicit a negative response from users and undermine the custodial staff’s work.

Fortunately there are a host of odor-control products that address malodors and fragrance restrooms to make them more appealing. There is also a science to proper placement of these products inside the restroom — one that should take into account factors such as restroom size, airflow, fragrance medium and the potential for vandalism.

One of the first places to consider installing air freshening products is at the restroom entrance. This not only sets the tone for people coming into the room, but also takes advantage of natural air movement when opening or closing the door.

“We tell people, especially in schools, to put dispensers above a doorway,” says Todd Sauser, director of marketing for Nilodor, Bolivar, Ohio. “You don’t want kids to knock it off the wall. Also, if it’s above the entranceway some of that fragrance carries into the room as they walk in, or carries out when they leave.”

“Restrooms have stagnant air, so placing one near the entry assists with more air movement,” she says. “We want it high, but we want staff to be able to reach it to change it out. At the same time we want some airflow to be able to pass over the top.”

Dispensers don’t necessarily have to be placed out of reach to deter vandalism; they can be placed out of sight, such as under a counter, says Chris Ward, air care category manager for GP PRO, Atlanta. This also aids in dispersing the fragrance as people walk by, creating a natural draft.

In addition to placing odor control dispensers near or above entrances, manufacturers recommend placing them close to the source of restroom odors.

“The most critical element is making sure you place the dispenser near the most odorous areas in restrooms, which are typically by the toilets and urinals,” says Kim. “The key is using solutions strong enough to fight odors while also being out of reach of potential vandals. We recommend placing dispensers high on the wall between bathroom stalls because it’s an area most people would not look.”

Urinal screens and urinal mats also help control odors at the source of the problem. In stalls, a motion-activated odor control dispenser can be installed on top of a toilet tissue dispenser. In addition, mats can be placed around the commode to collect drips; or toilet spray can be made available on a caddy. Users spray the toilet water before using the toilet, which prevents odors from escaping the water surface.

next page of this article:
Active Vs. Passive Odor Control