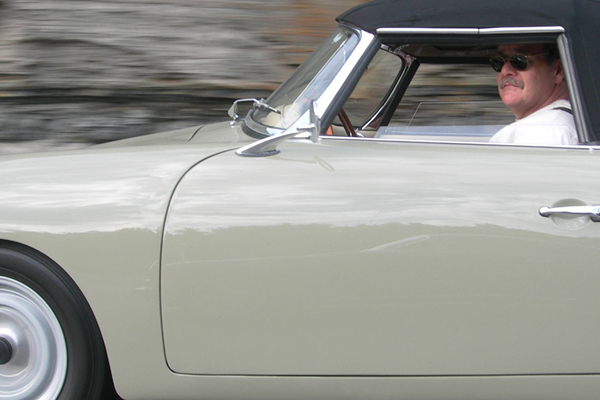 For business, Tom Roos drives an 11-year-old Chevrolet Suburban with 330,000 miles on it. But in his freetime, Tom, proprietor of SouthSan Sales and Marketing Inc., a manufacturers' rep firm in Durham, N.C., prefers one of the three Porsches in his collection.

"I've always loved sports cars, and had fun cars when I was younger," says Tom. "I rekindled my sports car hobby after my kids were on their own and I had more time and money."

"I came up with a long list of what had to be done to that car, and quickly decided to look for a different one that needed less work," he says.

Tom ended up starting his collection with a red 1964 Porsche coupe, which he still has. After that he purchased a 1959 convertible. Its color is stone gray (the official color name is very important to Porsche aficionados, but Tom says the color looks more like moss green) and has an unknown number of miles on it.

"I was out driving with my wife on a beautiful spring day and she said, 'Wouldn't it be nice to have a convertible?' When you get a buying signal like that, you have to act on it. It took me about a month to find the convertible," says Tom.

"Driving that one can be exhilarating," says Tom. "Occasionally I'll take it out on a track or an autocross. The fastest I've ever gone in that car on a track was about 150 mph. Everything passes by very quickly, and I get a little tense."

Tom belongs to three car clubs and participates in a number of their activities. Every Saturday morning he has breakfast with the local Porsche club. He also does hill climbs (timed events in which you start at the bottom of a hill and individually see who gets to the top the fastest) and car rallies. One of Tom's favorite rallies is a 12-mile route on the Blue Ridge Parkway that features more than 100 turns.

In addition, every year Tom partakes in the Porsche parade during The Porsche Club of America's annual convention and an annual concours d'elegance, a formal car show that raises money for charity. Tom also leads the local Porsche club on a barbeque run, in which 30 to 40 cars drive on winding roads for about two hours, ending with a North Carolina barbeque.

The challenging part of driving one of these cars, according to Tom, is that you might not make it home as planned.

"If you're driving a 45- or 50-year-old car, you could end up having to be towed home. This has happened to me at least three times, from as far as 100 miles away from home," he says.

Of Tom's three cars, which one is his favorite?

"They're like children — you can't have a favorite," he says.