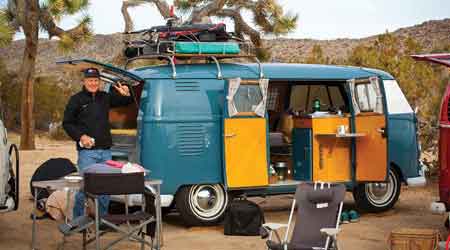 Pete feeling at home in his Dover Blue VW Bus

When he was a kid, Pete’s family would go on camping trips and, of course, bring along a Coleman lantern. When his own kids were old enough to camp, Pete continued the tradition by bringing along an old Coleman lantern laying around in his garage. Camping soon led to a collection.

“A neighbor gave me another lantern. And I’d see one in a garage sale,” says Pete. “Now, I have about 80 lanterns and stoves, and lots of parts to go with them.”

Coleman lanterns, introduced in 1914, are portable gas pressure appliances that provide a bright, white light. Originally, Coleman lanterns burned kerosene or gasoline. Current models can also use white gas or propane. In the old days, the lanterns had to be pumped.

Pete loves to camp and participates in various VW bus campouts in his 1961 Dove Blue Volkswagen Bus. One of these giant campouts is called “Buses by the Bridge” at Lake Havasu on the California/Arizona border every January, during which hundreds of VW Buses converge.

“The event raises money for local children’s charities, and last year, a record-breaking 620 VW buses participated and set a new record,” says Pete. “One of the good things about the big campouts is that there are no formal campsites. We literally circle the wagons at these group campgrounds.”

“The ‘floodgate opened’ and at the campouts that followed, guys brought lanterns to my campsite, saying, ‘We heard you’re the lantern whisperer,’” says Pete.

He started by diagnosing problems and sharing spare parts. Now, he displays a vintage hand-painted sign that says “Coleman Repair Center,” which he got from a store that was going out of business. He even did an instructional YouTube video on lighting a pump-up style lantern.

As Coleman lanterns got more popular at the VW campouts, someone suggested an impromptu nighttime lantern walk. So, about 20 people lit their lanterns at nightfall and walked to the lakeshore. The stroll around the campground ultimately became a regular tradition. This year, more than 100 people participated in the lantern walk at Lake Havasu.

“I try to use period-correct equipment, including lanterns, cast-iron cookware, old Coleman coolers and even a 1908 Griswold waffle iron that I use on my gas stove,” says Pete. “It’s really all about the nostalgia. Things you can interact with bring you back to a simpler, happy time. It’s soothing and therapeutic. It might seem funky and nerdy, but it’s fun to tinker with stuff, and a great way to decompress.”