Richard is an expert in collectible toilet tissue, and has an extensive collection of toilet paper and related memorabilia.

“My parents threw everything away, including my baseball cards, so I grew to stash things as I found them,” says Richard. “In the 1960s, I started collecting antique advertising, and then evolved into collecting toilet paper. The old toilet paper labels were beautiful.”

Richard has toilet tissue so old — and revolutionary at the time — that it even comes with instructions on how to use it.

Along with his assortment of tissue, Richard also collects related signage, price lists, brochures, promotional items and apparel, as well as old hand towels and cup dispensers. The items are prominently on display at the Weiss Bros. offices for all to enjoy.

“I like to collect things that we would have sold back in the day,” he says. 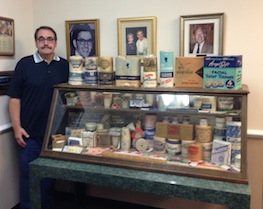 He expands his collection by searching eBay every day and visiting flea markets and auctions when he can. People also send him toilet paper related items as gifts. But it’s a hard hobby to grow. Toilet paper typically gets used up, so there is not much out there to collect.

“It’s unique if something made out of paper lasts 100 years,” he says. “The age really adds to the value because it’s not a heavy-duty kind of material.”

The collection includes a little bit of everything, from humorous items (like electric toilet paper, aka a plug-in corncob) to green bamboo paper from China. But the antiques are the real treasures, including an original four-pack roll of Charmin, a beautiful Lion brand roll from the late 1800s, and packs of toilet tissue sheets from the mid-1800s that predate rolls.

Richard says his best item is a three-roll box of Sani Tissue made by Scott Paper in 1902. The packaging includes instructions that tissue “should be crumpled in the hand before using it.”

“I think of it as the toilet paper equivalent to a Mickey Mantle baseball card. I paid more for that one item than I would pay for three full cases of toilet paper today,” says Richard.

Gretchen Roufs, an 20-year janitorial supply industry veteran, owns a marketing and public relations company in San Antonio. To suggest someone you think should be featured in “Freetime,” contact her at Gretchen@GretchenRoufs.com.