Josh Ward has loved storms and weather all of his life. Unsurprisingly, about 10 years ago, he became a storm chaser. Inspired by Oklahoma weather that is “exciting and changes rapidly,” Josh, who is purchasing manager for Treat’s Solutions in Oklahoma City, started chasing storms with a friend in college.

Storm chasers do more than watch for storms — they literally chase them. So, Josh and his friend joined up with two other guys and formed the Tornado Titans in 2009 to chase and photograph storms together. 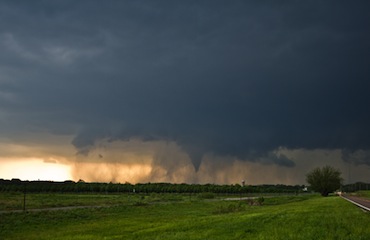 There are two different kinds of chasers: those who get really close to the storm so they can capture thrilling video footage, and those, like Josh, who admire the storms from a distance.

”I am interested in storm structures and wide-angle photography, so I chase a storm from about 10 miles away,” he says. “I’m more of a time-lapse storm photographer than an up-close guy.”

The art of storm chasing has evolved. Before mobile access to the Internet and radar, storm chasers had to rely solely on weather radios.

“You had to know what you were doing and watch the storm visually,” says Josh. “There would probably be five or six people out in a field watching a tornado. If you saw five or more tornadoes a year, it was considered a very good season.”

Now, because of the available technology and the popularity of storm chaser TV shows, lots of people think they can be storm chasers.
“Unlike the handful of people we used to encounter while chasing a tornado, today you probably see 100 people in the field just watching a thunderstorm,” says Josh.

Storm chasing should not be a hobby for the casual weather observer. The Titans have a program called “Titan U,” which aims to teach people storm chasing and weather safety.

One of the most difficult aspects of storm chasing is seeing the destruction tornadoes can leave behind.

“We love nature, but dislike what it can do,” says Josh. “We try to stay away from populated areas so we don’t have to see the damage that weather can cause.”

Ultimately, severe weather can and has caused destruction. That’s why giving back is so important to Josh and the Tornado Titans.

“Sometimes we are inadvertently the first responders after a tornado,” he says. “Just last year we had to move debris to help people out of a storm shelter. It’s a heartbreaking sight to see people step out of their shelter and see nothing where their house once stood.”