“Coyote” can mean different things to different people. To Jon Scoles, it represents a brotherhood that started with four friends (Scoles, Nick Grasso, John “Diff” Diffenderfer and Don Sinclair) who were roommates in college.

Jon, who is president of Scoles Floorshine Industries of Wall, New Jersey and recent president of ISSA, has been a Coyote since the group formed in 1975. He says that Coyote friendships run deep.

The Coyotes have a colorful history. Five years after graduating from college, the friends traveled to Florida for a golf trip. The following December, the golfers, their wives and some other friends went out for dinner. 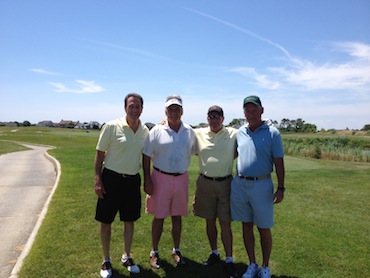 “We were a little loud and crazy, and carried the party into the bar after dinner,” says Jon. “The bartender approached us and said, ‘You guys are like a pack of wild coyotes!’ That was it. We decided we were ‘the Coyotes.’”

Legend has it that they invented a secret Coyote handshake that first night, along with a number of drinks such as the “Brown Coyote” (Kahlua and beer) and the “White Coyote” (crème de menthe, white vermouth and peppermint schnapps).

“We grew out of those drinks really quickly,” says Jon.

Almost 40 years later, the Coyotes still are going strong. The original four college roommates are still part of the pack, and similar souls have joined the group throughout the years.

The Coyotes are all about golf. After selling the idea of the first golf trip to their wives, the outing became an annual event.

“The Coyote tournament is really an opportunity to go away, shut everything down, and decompress,” says Jon. “It’s fun to spend this kind of time with a group of people you feel totally comfortable with.”

The Coyote moniker extends to the golf tournament, which is now a four-day event held twice a year: The Northern Coyote in New Jersey and the Southern Coyote in Florida. The winner earns the Coyote Cup trophy, which made its debut in 1994, as well as a hat that, of course, features a coyote tail.

“The winner gets to don the hat for the closing ceremony of the tournament,” says Jon. So far, Jon has won the Coyote Cup three times.

Wives are not allowed at the golf tournament, but the brotherhood frequently travels with their wives for other occasions. When I asked him to describe the wildest thing that has ever happened, Jon simply replied:

“The secret Coyote Code won’t let me talk about it. Just like Las Vegas: whatever happens at a Coyote, stays at a Coyote.”