For most people, fishing conjures an image of a boat bobbing on a crystal blue lake on a picturesque summer day. But that’s not the case for Jerry Gibbs. Instead, the marketing services manager for Nilfisk-Advance, Inc. of Plymouth, Minn., would rather be sitting on a frozen lake with a line dangling in a small hole cut through a foot of ice.

Jerry’s dad introduced him to ice fishing when he was 11 years old. Now, Jerry’s grandkids are the fourth generation in the family to enjoy the sport.

“Ice fishing is relaxing and good exercise,” says Jerry. “You fish, drill a new hole, fish again, drill another hole. You do a lot of walking. You could be halfway across the lake before you know it.”

Though he prefers to fish outdoors (if the temperature is above zero), Jerry and his son have an 18-by-12-foot fish house, or ice shanty, on the lake with a wooden floor, lights, heat and 10 fishing holes.

“We take the grandkids fishing in that house,” says Jerry. “We keep it at about 70 degrees when the kids are fishing. There have been times when it’s been so warm in there that I have worn shorts and a t-shirt.” 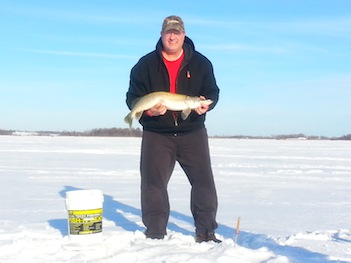 Until recently, Jerry had an even bigger fish house. This one included a full kitchenette with a stove and oven, dining area, television, DVD player and stereo. It was completely finished with cedar inside and heated by a regular furnace with a thermostat. It slept four people with room for six fishing holes.

“It was nice because you could be warm and cozy in the fish house, even if a big storm came up,” Jerry says. “It was just like sitting in your living room, carpet and all.”

The house sits on the ice for three months or so, depending on the thickness of the ice and weather conditions. Jerry also has two portable shanties, including a 6-by-8 two-person house, and a slightly smaller one-person version.

“The portable houses fit in my truck, which I drive right on the ice,” he says. “I like to move around from lake to lake.”

Sometimes Jerry ice fishes after work for a few hours, though he has spent as many as four days on the ice in a warm fish house. One of his favorite places to fish is Red Lake in Northern Minnesota.

“It is so big, there are plowed roads on the lake itself, along with organized street systems with street signs,” says Jerry.

There are even food trucks on Red Lake where fishermen can drive up and order burgers and hot dogs. It’s also not uncommon for restaurants to deliver pizza or Chinese food right to the lake.

Jerry prefers ice fishing to summer fishing — and with all the accoutrements, it’s easy to see why.

“In the summer, you have to contend with wind, sun, bugs and other boats,” says Jerry. “With ice fishing, none of that matters. It’s comfortable and so tranquil that you can hear the snow falling.”