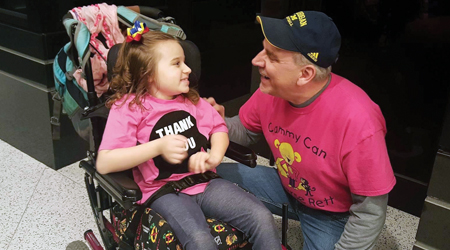 Gary Martin, right, shares a laugh with his inspiration, Cammy

There’s a video that Gary Martin just happened to watch online a couple of years ago that changed his life. When he talks about it, Gary says, “I always tell people that if you watch this video and don’t shed a tear, you probably don’t have a pulse, and someone needs to call 911!”

After I interviewed Gary, I watched the video. And, of course, it made me cry. See for yourself.

Gary is president of Detroit Garage Works, a manufacturer of industrial skin care and cleaning products based in Livonia, Michigan. The video he saw was about Cammy, an eight-year-old girl with Rett Syndrome, a rare, neurodevelopmental disorder that usually shows up in infancy.

Kids — mostly girls — with Rett Syndrome typically experience stunted growth, loss of the use of their hands, decline of language and social skills, problems with muscles and coordination, and breathing problems.

Every two hours, another child is born with Rett Syndrome.

“It discriminates. It usually goes after girls,” says Gary. “The biggest torture for families is that kids can be born perfectly healthy, and then when they get to be about 18 months old, the health of kids who have Rett Syndrome deteriorates. Before the onset of Rett, Cammy was perfectly healthy. I think she’s a genius. And now she’s locked in her own body.”

After watching the video 10 times, Gary was determined to meet Cammy. He reached out to the family via Facebook. He was so inspired by her, and moved by both the severity of Rett Syndrome and its sudden impact on healthy children, that Gary took action. He started raising money for the Rett Syndrome Research Foundation two years ago.

Gary garners contributions for the foundation in a variety of ways. He owns Sports Media Direct, a company that does marketing for professional race car drivers, and the race teams help Gary raise money for Rett Syndrome research. In addition, he participates in the “Cammy Can” fundraising event held for Cammy’s birthday each year in March. He also is donating one dollar for every gallon of product sold by Detroit Garage Works between Oct. 1 through Dec. 31 this year.

Gary said that besides helping to find the cure to the disease, which affects about one in 10,000 kids, fundraising activities help Rett Syndrome families see that other people care, thus the families don’t feel so abandoned due to the disease.

Over the past year, Gary’s efforts contributed to the more than $161,000 that was raised in Cammy’s honor for research.

“Every day, the researchers at the Rett Syndrome Research Foundation are becoming an inch closer to a cure,” says Gary. “I just hope one is found soon. I want to see Cammy walk.”

“There’s nothing I wouldn’t do for this family,” says Gary. “I love these kids.”