David Edge says we can’t simply be content to let others run things — we have to participate. So instead of sitting back, he sits on the board of county commissioners for Robeson County.

David, president and owner of image supply inc., a Lumberton, N.C. distributor, ran for a seat on the board in 2010, and is now serving his fourth year.

“It takes a long time to get a grasp on all the county programs, along with the federal and state laws,” says David. “The amount of information you have to learn is unbelievable. It’s something new all the time.”

During a trip to the local Republican party headquarters to pick up campaign signs, a volunteer persuaded David to run for office.

“She said, ‘We need you.’ I’ve always voted but never really took part in more than that,” explains David. “I knew I had to do it, because people can’t just sit back and complain.”

During the campaign season, David spent hours going door-to-door and often wrestled with his decision to run for a seat.

“Sometimes I thought to myself, ‘What in the world are you doing?’ I would even think, ‘Maybe I’ll quit this campaigning and then I’ll just lose.’ Then I would tell myself that I’m not a loser, so I worked really hard.”

In the end, David secured his seat. He is one of eight commissioners for Robeson County, which is the state’s largest county based on land area. The county was incorporated in 1787 and has a population of 134,000.

As a county commissioner he puts in an average of 10 hours each week, and some weeks it is double that. Some nights the board doesn’t finish until 10 p.m. 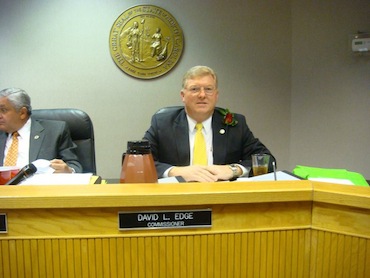 “One of the challenges of the job is that people expect you to be everywhere. Sometimes there can be three invitations for the same night, particularly during the holiday season,” says David. “It has definitely cut into the amount of time I can spend on my business.”

Serving as a county commissioner is quite different than being a company president. For example, an elected official has to go about problem-solving delicately.

“In your own business, you just do things because they need to be done,” says David. “As an elected official, you have to convince others to see things the way that you do.”

Despite the significant time commitment, sacrifices and hard work, David still encourages people to get involved and run for office.

“We have to be involved, and we have to speak up for our beliefs and speak boldly,” he says. “There are too many people who keep their mouths shut in order to be politically correct. When I was asked about how much one person can really do, I went back and made a list of the things I’ve been able to do or influence since I was sworn in to office, and I feel really good about what I’ve done.”