“When he lifts his face, ev’ry ear in the place is on him.” These lyrics from Neil Diamond’s hit, “Brother Love’s Traveling Salvation Show” fittingly describe the scene when Bob Lee hits the stage. Bob, vice president of sales for Berk Wiper International LLC of Boyertown, Pennsylvania, also fronts Real Diamond, a Neil Diamond tribute band that performs all over the country.

Bob, also known as Curtis DiDomizio, has sung and played guitar in a variety of rock-and-roll bands for over 30 years. He has also been a karaoke host and performer, which is where his raspy growl and strong baritone voice began to remind people of Neil Diamond.

“My late uncle, George DiDomizio, had a lifelong friendship with Elvis. When I was doing karaoke, I sang Elvis songs because of my uncle,” says Bob.

“About 10 years ago I was singing at a club and a lady asked me to do Neil Diamond’s ‘September Morn.’ When I finished, she told me that I sounded like Neil Diamond trying to be Elvis. From then on, Neil Diamond songs were what I sang.”

“Sometimes we need a third singer for the Diamondettes, our female singers, so Amy Berk, who is married to Berk Paper’s president and owner Jeff Berk, steps in,” he says.

Real Diamond plays to the 40- to 80-year-old demographic, often to sold-out houses.

“The biggest concert we’ve ever played was a pre-game show at a Philadelphia Phillies baseball game,” says Bob. “I even had a little kid ask me to sign a baseball.”

The band plays in casinos, performing arts centers, outdoor venues, and private events. Bob does some of the booking himself, but the band also uses 15 agents throughout the country.

“We play some of the same venues that Smokey Robinson and Jeff Foxworthy perform in,” he says. “It’s almost surreal.”

Bob does more than just sing Neil Diamond’s tunes — he also dresses the part of the performer. Though he usually has his stage clothes made by a tailor, sometimes he has to create his own costumes.

“I just bought a rhinestone-fastening machine on eBay,” Bob says. “I can’t just go on the Internet and find rhinestone-studded pants, so you do what you gotta do.” 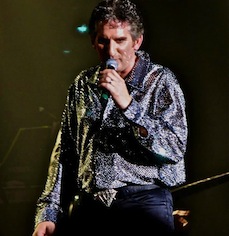 “To pay tribute to all the New Jersey cities that love us, we called the album, ‘Hot Jersey Nights’ (a play off of Diamond’s live album, ‘Hot August Night’). About 9,000 people were there, singing and dancing. There were fireworks while we played ‘Coming To America,’ our encore number. It was awesome,” he says.

Apparently, filmmakers think so, too. The band is going to be featured in a documentary called “Play Me,” a film depicting the on-and off-stage stories of Neil Diamond tribute artists.

But, even with the attention and accolades, Bob stays humble.

“I feel non-deserving. It is incredible to be 50 years old, traveling the country, and have people fall all over you when you walk into a club,” he says. “I will continue to do this until I take my last breath. If I’m 80 years old, retired, and living in Florida, you’ll find me at that little side bar singing ‘Love on the Rocks.’”