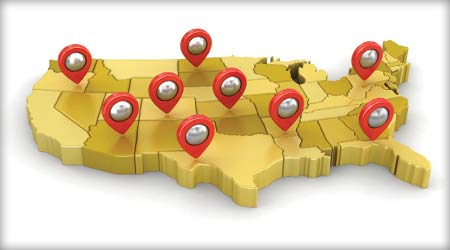 Distributors are either moving forward or backward. Standing still or staying the same are not options. In business, the possibilities are growth or contraction. For those businesses that are growing, branch expansion comes into play. While this is obviously a good thing, there are challenges that need to be navigated along the way.

Ed Stasiak is the vice president of KSS Enterprises, a distributor based in Kalamazoo, Michigan with seven locations throughout Michigan and Northern Indiana. Stasiak sees growth as the only option in today’s market.

“Over the years, the fight against traditional and non-traditional competition has intensified,” says Stasiak. “The only option is to grow and get big, or risk being swallowed up.”

Not all expansion is created equal. The two types of expansion — acquisition and greenfield — offer opportunities but come with challenges. However, before deciding what type of expansion to pursue, distributors need a legitimate reason to expand.

Expansion is exciting and can energize both staff and management, and a successful expansion can add to a company’s bottom line.

In addition to the profit drive, distributors may expand to be closer to existing customers and/or fill a distribution hole for manufacturers, says Jason Bader, owner of The Distribution Team, Portland, Oregon.

Before expanding for existing customers, Bader recommends figuring out monthly operating costs, talking to salespeople about the costs, and seeing if they can bring that amount in for three consecutive months.

“This puts the responsibility on the salespeople to generate revenue to get the company close to profitability and takes emotion out of the equation,” says Bader.

Opening up a new location for manufacturers can deepen the relationship between the manufacturer and the distributer.

Which Type of Expansion Is Best?

When expanding, is an acquisition or greenfield better? There’s no simple answer, but the flurry of merger and acquisition activity in the jan/san industry makes it seem that distributors prefer the acquisition route.

Over the last 10 to 15 years, most branch expansion has been via consolidation, says Michael Workman, president of Michael E. Workman Associates, College Station, Texas, and professor emeritus at Texas A&M University’s College of Engineering. This is because it is more expedient to buy or acquire a location rather than start-up from scratch. Despite this trend, there isn’t one right way to expand, says Workman. The choice is based on the company or its owner’s preference in growth.

For Stasiak and KSS Enterprises, the preference is to grow through acquisitions. They have only grown through greenfield once.

“A greenfield opening is more challenging for us,” says Stasiak. “When you start from scratch, there’s a mountain to climb.”

KSS prefers acquisitions because of the basis of sales and the accelerated progress.

Growth has occurred primarily through acquisition for Brady Industries, a Las Vegas-based distributor with 16 locations.

“They are both equally challenging, though not necessarily in the same way,” says Ryan Banks, Brady Industries’ senior vice president of sales and marketing.

next page of this article:
Maintaining Organizational Culture