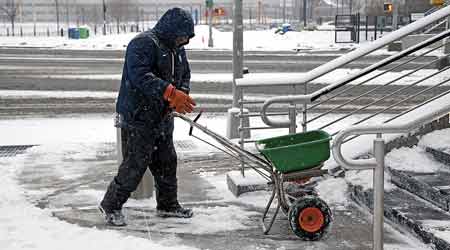 Thinking about winter while the sun shines brightly and people flock to the beach isn’t the easiest of exercises. But as jan/san distributors know, summer is the time to plan for and seek ice melt orders for the next winter.

While determining the amount of ice melt needed months before the first snowflake drops is difficult, incorporating various methods can help put distributors in the best position possible.

Breakthrough technology helps end users in many facets of their businesses, but determining what Mother Nature will do in the future is not one of them. Even experts struggle to forecast weather just a couple of days in advance. And the tools they use? Well, those vary in reliability.

“Forecasting the weather beyond 30 days is tricky and more than 90 days out is very difficult,” says Michael Fagin, an operational meteorologist with West Coast Weather in Redmond, Washington.

Although the Farmer’s Almanac claims 80 percent accuracy, meteorologists disagree and note predicting 18 months in the future, which is what the Almanac does, is impossible. However, over the years, it has been the most accurate of sources.

In the winter months, Jo Ellen Byrne, vice president of procurement & marketing for Acorn Distributors, Indianapolis, says she checks the weather almost daily on weather.com  or with the Weather Channel app. She says dot-coms and apps have definitely helped her business forecast more accurately.

“However, as we all know, Mother Nature can have a mind of her own,” says Byrne.

Some distributors analyze the average inches of snow a given area received in the past 10 winters to help guess how much will fall in the next season.

“You’d get enough variety this way, so, off the top of my head, I’d say this would be as good of an approach as any,” says Fagin.

Over the years, others have shared similar opinions with Sanitary Maintenance regarding the analysis of past snowfalls.

“In the past we have allowed our customers to give us an estimate as to how much they need,” said Todd Martin, sales manager of With A Grain Of Salt, Leo, Indiana, in a 2009 interview. “This year we stuck to the real numbers, basing it off of a four or five year average that a company has had with us.”

A 2012 report by Sanitary Maintenance found that many distributors and manufacturers work off, at minimum, the previous 7-year average to determine how much ice melt should be bought for an ensuing winter.

While some are fine relying on the data of past years, others say the difference between one year and the next can simply be too great.

“Living near the coast in the Mid-Atlantic, we have had some years that produced only one snow storm to as many as 15,” says Matt Scoles, vice president of Scoles Floorshine Industries in Wall, New Jersey. “With dramatic temperature changes from year to year, it can be quite difficult to average. For example, this year we had 80-degree heat in February and six storms between March and April.”

Byrne says averaging the snowfall from previous years hasn’t been a good indicator for Acorn Distributors on what the upcoming season will bring. Keith Attman, vice president of supply chain at Acme Paper & Supply, Baltimore, also says weather changes too much to rely on a strategy based on average.

Since predicting the weather two seasons down the road makes little sense, what do other distributors do to ensure they have enough ice melt to last through the last snowfall? It turns out they rely on a variety of methods.

The amount of ice melt left over at the end of the season, whether in the distributor’s warehouse or at the end user’s location definitely comes into play when deciding how much to order for the upcoming winter. Scoles says his company runs a preseason sale at the end of summer so his sales representatives can determine how much inventory they’ll have left after those transactions are completed.

Because Scoles tries to have as little inventory left over as possible, he has another solution.

“We use a forward warehouse, which allows us to have lower inventory levels so our end-of-year stock is minimal,” says Scoles. “A forwarding warehouse is a centrally located warehouse used by our buying group and it’s close to our own warehouse. It stocks many items that we carry so it’s easier for us to purchase on demand as well as decrease the number of backorders.”

Using a supplier with distribution points near Acme Paper’s facilities lets the company have access to ice melt when needed. Suppliers who can provide and turn around orders quickly — in less than a week — are favored, says Attman.

“I do watch the seven-to-10-day forecasts because I have to be cognizant of what goes on all over (the country) because if someone has a major (weather) event, the supply can dry up quickly,” says Attman.