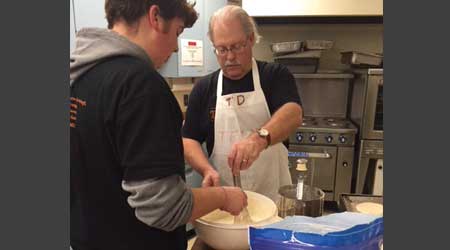 Ever since he was a youth himself, Ted Stark has been guiding teenagers. Ted, president of Dalco Enterprises, Minneapolis, and also 2018 president of ISSA, volunteers for a religious youth organization.

“In high school, I volunteered as a youth leader for a junior high church group, and in college, I worked with the high school group,” says Ted. “I was a volunteer youth minister since I got out of college in 1979, and did this on a weekly basis for about 20 years.”

In the mid-1980s, Ted also started as a volunteer adult leader for Teens Encounter Christ (TEC), a nondenominational Christian organization. For Ted, this means that he typically spends three or four weekends each year with up to 160 teenagers who are 9th to 12th-grade students, along with 15 adults who work as coordinators, spiritual leaders and chefs.

These weekend retreats rotate among 12 different churches in the Minneapolis/St. Paul area as well as in western Wisconsin. Depending on the weekend, Ted serves in different roles.

“I often serve as ‘adult coordinator,’ which is kind of the general manager of the weekend, even though there are two student leaders who actually lead the weekend,” says Ted. “The adult coordinator makes sure the details happen, and coordinates communications between the teams that are responsible for each weekend.”

Most recently, Ted and his wife Amy led the kitchen team, which shops for the food, prepares it on site, and serves it. Ted says the food is pretty good. Breakfast, for instance, is more than a piece of toast, and includes things like pancakes, egg soufflés and cinnamon rolls.

Besides being an adult leader for the retreats, Ted has served on the United TEC council for about 15 years.

“I was the treasurer, and now I’m the supplies coordinator,” he says. “The council gets together monthly to review the past weekends, and talk about what went well and what we could we do better. We make changes to our program as the times change, such as incorporating different music and newer ministry models. We always try to keep it fresh.”

You might think that 160 teenagers on an all-weekend retreat could be a little chaotic, but the schedule is tightly packed, so the kids don’t have much time to get into trouble or mess around.

“We do a good job of mixing up the instructional talks with music, and fun and games,” says Ted.

Ted says there are parallels between serving as a TEC leader and serving as the ISSA president.

“In serving on the ISSA board, we set the strategy for the association and develop benefits and ways to help members with their businesses,” says Ted. “In TEC, it’s kind of similar in terms of what we’re trying to do for a student’s faith journey. The TEC strategy is the Bible and our theology. We share our personal faith journeys and how we develop our faith. In both faith and in business, you’re always learning and trying to improve.”