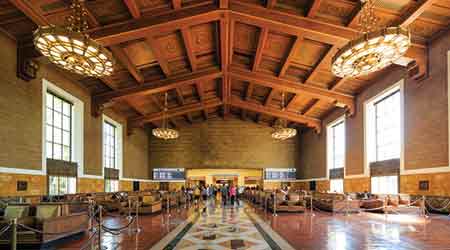 The Los Angeles Union Station (LAUS) is the main railway station in Los Angeles, and is the largest railway passenger terminal in the western United States. The station is a major transportation hub for Southern California, serving almost 110,000 passengers a day.

In addition to serving as a major transportation hub, LAUS offers dining experiences and hosts a rotating collection of performances and art exhibitions. It also provides a venue for corporate events, weddings and more. With these experiences, LAUS sees more than 1 million visitors per day.

LAUS is continually looking for ways to make travel and cultural experiences outstanding for everyone who enters. However, for nearly eight years, the stations’s cleaning provider ABM, New York, had to contend with odors coming from the men’s restroom in the main terminal — with extremely unpleasant smells continually wafting out into the waiting area, a shoe shine stand and restaurants.

Although the facility management team tested a number of different solutions, such as urinal screens, various masking agents, timed fragrance misters, as well as passive release solutions through osmosis cartridges, nothing effectively rid the area of the odors.

“The men’s room was an odor eye-sore for us, and people would smell the stench approximately 30 feet away from the entrance,” says Jesse Falconi, assistant chief engineer, LAUS. “As such, we needed a robust solution that was easy to use — and surpassed anything that we had previously tried throughout the years.”

By working with San Diego-based WAXIE Sanitary Supply, ABM learned about how a custom-built solution from Fresh Wave IAQ, Long Grove, Illinois, could be the solution for tackling this monumental odor challenge.

The Fresh Wave IAQ Air & Surface Liquid is a proprietary blend of environmentally friendly ingredients, including water, lime, pine needles, aniseed, clove and cedarwood. This blend is effective at eliminating tough odors such as smoke, mildew, chemical fumes, vomit, feces, urine and food. In addition, as this is a safe, eco-friendly solution, there is no need to evacuate the area being treated while the unit is in use.

Now at LAUS, the unit runs for 20 hours a day, which coincides with the station’s operating hours. It also has a timer for when the unit runs low on product — allowing for continual, round-the-clock odor control. As a result, the odors have been completely mitigated.

“Now, the most affected areas are odor free and the property management team no longer receives odor complaints,” says Abraham Boche, project manager – Union Station for ABM. “Having an eco-friendly solution was critical, as we did not want our engineers and other staff to be breathing in harsh chemicals when they are servicing the restroom.”