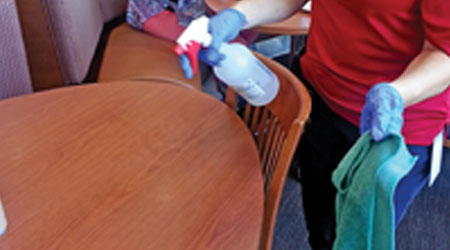 Lisa Fike, assistant building supervisor, cleans the dining halls at the University of Wisconsin with engineered water PHOTO COURTESY OF UNIVERSITY OF WISCONSIN

While there will always be a demand for chemical cleaners, distributors of jan/san supplies should consider adding engineered water products to their inventories. Although engineered water is still not widely deployed, the number of in-house cleaning managers and building service contractors using these products is steadily growing.

Consider Mervin Brewer, assistant custodial manager for the Salt Lake City School District. There are 35 schools and facilities in the district, and according to Brewer, every building has been touched to varying degrees by some form of engineered water, with the product being used almost exclusively in several.

Brewer’s objective over the next three-to-four years is to have engineered water become the main cleaner and sanitizer in all district buildings.

Krause says there are approximately 10 traditional chemicals still on the division’s product list, although it has eliminated the use of products like window cleaners, all-purpose cleaners and disinfectants, which accounted for at least 80 percent of what they use.