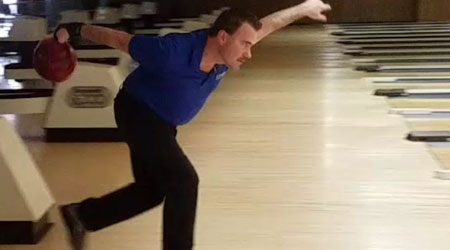 Bill Allen is a competitive amateur bowler who says he’s in the second half of his bowling career. And what a career it’s been so far. It all started in 1983 when Bill bowled for the first time in a church league at age 16.

Bill, who is also known to many in the industry as “Smooth and Groovy,” is the territory manager for Fagan Sanitary Supply in West Elizabeth, Pennsylvania. He considers his induction into the Mercer County Bowling Hall of Fame in 2009 the culmination of the first half of his bowling career.

Prior to his induction, Bill was a member of teams that won city and county championships, and he’s won singles championships, as well. He was a state tournament contender who placed in the top 10 twice (out of almost 4,500 entries). In other state-level tournament play, he assisted in five team titles and won four different “Top Bowler of the Tournament” awards. He bowled in the United States Bowling Congress national tournaments, coached a medal-winning high school bowling team, and bowled a couple of perfect games (a score of 300).

“I like the sport of bowling because it allows people of any age or ability to compete and enjoy something athletically,” says Bill. “Because it’s a social sport, bowling allows an opportunity to enjoy friendships while you’re doing something. And when I compete in league play or a tournament, I typically think of myself as my own competition, rather than trying to beat other people.”

Now that he’s into his “post-Hall-of-Fame” bowling career doesn’t mean that Bill is cutting back. He bowls in a league one night a week and competes occasionally in tournaments. His average is still higher than 200.

However, his primary bowling focus these days is being a coach to his niece Heidi.

“Working with Heidi has been the greatest joy of the second half of my bowling career,” says Bill. “I started working with her three years ago when she was an average bowler. Since then, she advanced into being one of the best high school girl bowlers in the area. Most recently, Heidi became the youngest girl at age 15 to win the Youngstown (Ohio) Junior Masters Tournament. She carries one of the highest averages in her high school athletic conference, and has had top 10 success in some individual state tournaments.”

Bill was proud to say he and Heidi won an adult/junior tournament in Greenville, Pennsylvania.

“The things that bring the most joy to me have to do with what I get to experience with others at the bowling lanes,” says Bill. “I expect to be around bowling in some manner for the rest of my life.”