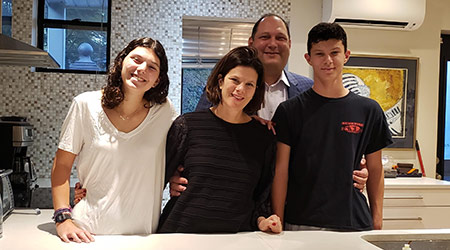 Paul Goldin has two big jobs: he's vice president of Avmor Ltd. of Montreal, Québec, Canada, and he serves as the 2019 president of ISSA. It's been a busy year for Paul, but he has always made time for family and traditions.

"Family time is extremely important to me," says Paul. "We are a very close family."

One of Paul's family's favorite traditions is their Friday night Schabbat dinner, which they've held nearly every week for about 20 years. The dinners, which include Paul's extended family, are tradition amongst many Jewish families.

"It's actually organized chaos," says Paul. "At a bare minimum there are at least 12 of us, and there are often as many as 25 at the dinner. Sometimes the kids bring friends, other times we invite an additional family. It's wonderful."

The weekly dinner brings three generations of family members together to spend quality time with each other. Paul's kids have grown close to their cousins thanks to Schabbat. "We talk about what happened during the week, and what's going on in the news. We tell funny stories. And everyone has opinions that they share," says Paul. "We rarely talk about business — and make it a point not to. Once in a while we'll sneak in a few words about work, but we don't have transactional business conversations."

Each dinner is a lively time, with plenty of conversation. Even though French is Montreal's official language, Paul noted that they speak English at dinner. "Our family's first language is English. I consider it a privilege and a gift to speak multiple languages," he says.

The cooking on these Friday nights is eclectic and shared among multiple cooks.

"My wife does a lot of the cooking," says Paul. "Sometimes I'll grill if it's nice weather at the end of summer, into the fall."

Paul sees the Friday night gatherings as an important way for his kids to gain a sense of family traditions.

"My kids, who are 16 and 18, are already talking about where they're going to do Schabbat when they get older," says Paul. "It's not a chore to them — it's fun."

While Paul doesn't speak business at the Schabbat dinners, the gatherings have helped to make him a better leader.

"It certainly harnesses your listening skills, your debating skills in a very lighthearted manner, and even your leadership skills, because, well, good luck getting 20 family members to stay quiet for two minutes," says Paul.