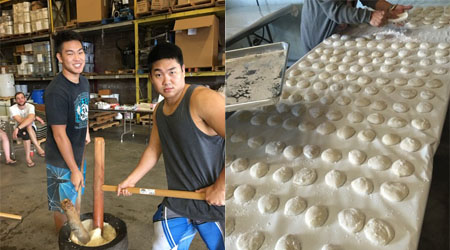 Every family has holiday traditions, but not all can trace them back hundreds of years. The Morisada family can trace their New Year’s tradition of mochi-pounding back 13 centuries to their ancestors in Japan.

“My grandfather, born and raised in Japan, came to Hawaii in the early 1900s, and brought the tradition with him," says Emily Morisada Kuraoka, executive vice president and chief operating officer for ABC Corporation in Waipahu, Hawaii. “My dad, and now my brother Gavin, have made sure the mochi-pounding tradition continues.”

Gavin Morisada, ABC’s president and CEO, staunchly observes the family customs. According to Emily, he gravitates toward traditions and processes that were done in the old days, and mochi-pounding fits the bill.

The process starts with the right ingredients and the proper tools.

“We buy the rice raw — specifically, glutinous Japanese-style rice — and steam it in bamboo boxes that are about 80 years old and originally from Japan,” explains Emily. “The pounding takes place in the ABC warehouse, and we use the same mortar — which is made of lava rock — that my grandfather brought to Hawaii.”

The pounding also involves mashing the rice with big mallets made of bamboo, which breaks up the rice and makes it sticky. After constant pounding, the consistency becomes smooth and almost dough-like, after which it is moved to a floured table, then molded and shaped into small cakes.

The tradition inspires the whole family and their friends to get together every year. The guys usually pound the mochi, and the women typically mold and shape the finished product.

“Normally we make about 120 pounds of mochi for our relatives, friends and whoever celebrates the day with us. There are usually around 70 people who come for the mochi-pounding,” says Emily.

The finished mochi, she explained, is used in various ways.

“We put some on a plate with other symbolic things like salt for purity, red beans and chestnuts to represent the land, and seaweed and fish to represent the sea. We place these plates on altars at home, and on the trucks, desks, and mixing machines at work as an offering to the Gods and spirits of nature to bless us in the new year,” says Emily.

Plain mochi is also commonly used in a soup called Ozoni that is shared at midnight on New Year’s Eve for good luck. The family will then have sweet mochi on New Year’s Day and again for the first few days of the new year.

The holiday tradition is embraced by the entire family. In fact, Grant Kuraoka, Emily’s son, is very committed to the mochi-pounding practice. “It’s a great reason for the whole family to gather, along with friends,” says Grant. “All of the cousins are encouraged to bring their friends. We like other people to learn about and join in on our tradition because it’s a happy time. We want to spread the hopes for the best new year ever.”

Last year, the Morisada family and friends couldn’t gather to pound mochi because of the pandemic, but Emily kept the tradition alive. She purchased two mochi-making machines and made the delicacies herself.

“With the way the world is right now, I want our kids to know that if everything else fails, there’s still family and the traditions that keep us together,” she says. “I hope that our mochi-pounding tradition helps our kids to always remember where they came from. It’s yearly reminder of our roots.”