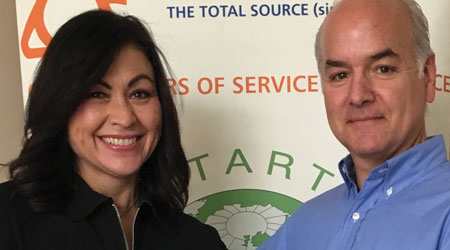 Becoming a two-time member of the $5 million club hasn’t come easy for Lisa Nichols, a sales rep at Industrial Soap Company in St. Louis. It takes a lot of hard work, a work ethic that is second-to-none, and a supporting cast who has her back every step of the way — at work and at home (her husband Bob also works in the jan/san industry as a manufacturer’s rep).

“Lisa is a rarity in this day and age of people trying to get things handed to them with little effort,” says Tom Sher, vice president of sales at Industrial Soap. “Lisa has taken it upon herself to gain the industry knowledge needed to make herself a valuable person within the eyes of her customers.”

When it comes to assisting her customers in training or educating them on procedures or products, Nichols does so with a tireless work ethic.

“Whether it’s at 4 a.m. or 11 p.m., she is on call to get the job done,” says Sher. “Whether it’s writing procedure manuals or updating SDS sheets and everything in between, Lisa goes the extra mile for each and every customer.”

Nichols isn’t one to hold anything back. She is extremely passionate about what she does in work and in life.

“I believe if you’re going to do something, do it right,” she says. “And the way I think, you should do it right the first time and do it full out. That’s just the way I am.”

Nichols recognizes that success like this isn’t the result of a single person’s effort. In her acceptance speech for winning Industrial Soap’s Sales Rep of the Year Award, the first thing she said was, “I can’t do what I do without every single one of you people.”

Nichols has landed quite a few big-name recognizable accounts spanning just about every sector, but servicing the healthcare industry is her bread-and-butter. In fact, in the eyes of her peers, she is considered the leading healthcare specialist in Missouri, helping several major acute and long-term healthcare providers meet strict compliance and train their staffs. This consists of helping them with their scores, fighting infections the right way, and showing them the newest chemicals that are out there to combat C. diff, MRSA and other hospital-acquired infections.

“I’ve never seen customers that care about their sales rep more than Lisa’s,” says Sher. “There’s a reason she has been successful over the many years in the business. Lisa leads by example. She is quite a remarkable individual, and Industrial Soap is lucky to have her as part of our team.”

Nick Bragg is a freelance writer based in Milwaukee. He is a former Deputy Editor of Sanitary Maintenance.