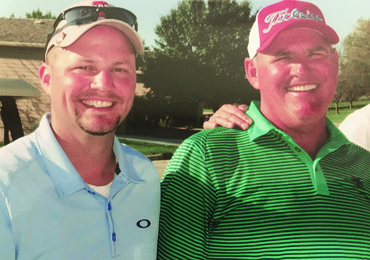 This year marks two significant anniversaries for Rick Storjohann: He is celebrating 40 years of marriage to his wife, Barb, and 40 years of employment with Capital Sanitary.

Storjohann began working at Capital Sanitary in Des Moines, Iowa, as a controller in 1976, soon after marrying Barb, his high-school sweetheart. But it wasn’t until 1991 that he ventured into sales. Today he is one of the company’s top salesmen and a well-respected leader to his peers.

“Rick is honest, has a great sense of humor, and he’s very humble,” says Joni Miklya, marketing director. “He’s really good at foreseeing challenges his customers are going to face, so he often knows their needs and has that answer for them right away. I think that’s one of the reasons his customers are so close and loyal to him: He’s a great problem solver.”

Storjohann is also a great family man, and his commitment to family sets him apart both on and off the job.

“We are a family-owned business, and we have a very close family here,” says Miklya. “Rick is a very dedicated family man. He knows the importance of family, and his family is very close.”

Storjohann’s son, Jason, also works as a sales rep at Capital Sanitary and looks to his father for leadership.

When asked what makes him a successful sales leader, Storjohann says, “I just work hard. I was raised on a farm, and you started early and sometimes you worked late. The job wasn’t done until the job was done.”

And at Capital Sanitary, Storjohann’s work is never done. If he isn’t meeting with customers or making a sale, he’s helping out his coworkers any way he can.

“Rick is one of the first people to jump in and lend a hand no matter what he’s doing,” says Miklya. “Even though he’s on the sales team, he’ll always help with anything that’s going on, whether it’s cleanup in the warehouse or getting ready for a trade show. He’s always the first person there.”

Storjohann has seen a lot of changes in his 40 years with the company. For instance, face-to-face meetings with customers have given way to text messaging and emails. But he’s quick to point out that it’s still a relationship business.

“Rick is very good at handling all the new IT issues and everything that comes along with updates and upgrades,” says Miklya. “That says a lot about him. He’s always willing to learn something new and embrace those challenges.”