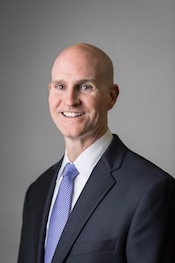 At Philip Rosenau Co. Inc., in Warminster, Pennsylvania, Mike Clothier has earned the title of top sales person for the past seven years. But it is his character more than his sales numbers that have earned him the respect of his fellow workers and led to three nominations for this year’s award.

“Mike is very tenacious,” says Bill McGarvey, director of training and sustainability. “When his customer has a problem, he treats it with the highest priority and continues to work until he has a resolution for them.”

According to John Thomas, sales manager, Clothier has the ability to effectively communicate and develop business relationships in the janitor’s closet as well as the C-suite — a skill he acquired while working as a district manager for a company that provides cleaning services to nursing homes.

Clothier admits that his myriad responsibilities while working for the contract cleaning company helped to prepare him for his position at Philip Rosenau.

“I worked as a housekeeper. I worked as a floor man. I worked as a porter. I even did laundry in the nursing homes,” he says. “I got a lot of experience that way, but I also got to understand my customer’s perspective, so that side of the business prepared me to better service building service contractors and all my customers.”

Clothier also understands the value of using internal and external resources to provide his customers with the best service possible.

“Mike is very open about bringing other resources to his customer,” says Thomas. “He doesn’t keep other people away from his customers because he’s afraid of them learning too much about his customers. He wants to involve as many people as possible in the service of the customer.”

This approach has led to his successful partnership with McGarvey.

“When I first came to Philip Rosenau there were sales reps that were reluctant to work with me,” says McGarvey. “They didn’t understand my role and how it might help them. But Mike was one of the few early adopters of using my talents to help him and his customers.”

Together, Clothier and McGarvey meet with customers to provide training or troubleshoot particular problems they may have. Clothier also teams up with fellow sales reps — both new and experienced — who have different areas of expertise than he.

“I don’t always know everything, but I have support from my company and other manufacturers that I can draw from to help me,” says Clothier. “Ultimately my goal is to solve my customer’s problem and give them the best answer possible. If I don’t know the answer I bring in other people that have expertise. That’s the culture of what we do: As a sales force we are very supportive of each other and help each other wherever we can.”