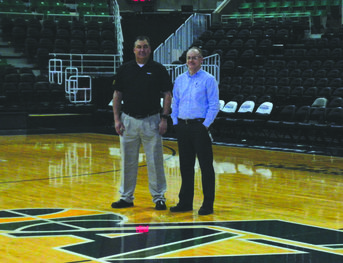 Not many salesmen would encourage a customer to engage in side-by-side comparisons with competitors’ products. But that’s exactly what Curt Rimann, senior account executive at the Salt Lake City branch of San Diego-based WAXIE Sanitary Supply, did when his longtime customer Daniel Knight expressed interest in attending the ISSA/INTERCLEAN show.

Not only did Rimann support Knight’s interest in attending the show, but he secured a pass, booked him a room and provided transportation.

“Curt feels like a partner,” says Knight, director of operations for Larry H. Miller Sports and Entertainment. “I deal with a lot of sales folk, and typically you get the feeling they just want to make a buck. Curt doesn’t come across that way. He’s someone who’s trying to help you solve your problems.”

Rimann knows this approach may lose him some business from time to time (Knight expressed interest in some garbage cans at the show that WAXIE doesn’t offer), but he is confident it’s a win-win for both WAXIE and the customer.

“I’ve always felt its best to approach relationships with any of my customers from a service standpoint,” says Rimann. “You may not win every sale that way, but you’ll have a long-term relationship with them. If you’re doing the right thing by the customer, things will be OK. It’s more of an advantage for [customers] to be able to compare us against our competitors.”

Rimann has also secured another $300,000 worth of business from the organization’s Megaplex Theaters. Sales include everything from ride-on equipment to vacuums and buffers — and everything in between.

“By providing the service that he provides, he’s gone from selling $25,000 to more than $450,000 worth of equipment and supplies a year to our group,” says Knight.

Rimann began his career at WAXIE in the service center, which proved invaluable when he began selling equipment.

“Typically, customers save a lot of labor dollars and get better results [using equipment] rather than some of the standard methods of cleaning surfaces,” says Rimann. “So knowledge of that equipment benefits my customers and helps me get to the bottom of what they’re trying to accomplish.”

Case in point: Rimann introduced Knight to a ride-on carpet cleaner that has saved the company a total of 10,000 man hours a year in carpet cleaning.

“Curt’s gotten to know our business and the things that are concerns for us,” says Knight. “He brings us solutions that help us with those concerns, rather than trying to sell us the latest product. He’s always looking out for my interest, which I think is rare among salesmen of any kind.”