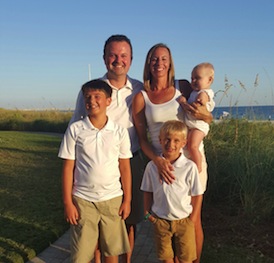 In January 2015, Bradley Payne, territory consultant for Kenway Distributors Inc., Louisville, Kentucky, was diagnosed with colon cancer. Payne had been in and out of the hospital since September 2014, but it wasn’t until the start of the New Year that he received the devastating news.

“There were two ways I could go,” says Payne. “I could man up, take it and move on, or I could let it beat me.”
Not one to give up without a fight, Payne chose the former. And thus began a year of treatments and surgeries that had him hospitalized a total of seven times.

Despite his diagnosis — or perhaps because of it — Payne continued to work tirelessly from his hospital bed where tablets, laptops, cell phones and food trays vied for space on his bedside table.

“Work to me is not work,” says Payne. “I enjoy doing it, and it helped me get away from the illness that was right in front of me.”

Payne conducted several meetings from his hospital bed via Skype and even held a meeting in his room with the hospital’s EVS department. (The hospital was one of Payne’s accounts.)

“It was a big meeting with the infection prevention crew to go over their disinfectant wipes,” says Payne. “I’d been waiting for the opportunity for over a year, so I didn’t want to miss the meeting.”

Oblivious to the fact that Payne was a patient in their hospital, the infection prevention team members came up to his room for the meeting, per Payne’s request.

“When they came into the room and saw me, I assured them that I was fine and that seeing me in a hospital gown would be the worst of it,” Payne jokes.

It is this unwavering drive and jovial nature in the face of adversity that separates Payne from other sales reps.

“Bradley’s always maintained a very positive attitude, or found a positive spin, and constantly moved forward,” says John Mackey, vice president of sales for Kenway. “Often, we as humans let situations overwhelm us, and we lose track of where we’re headed. Bradley’s attitude is, ‘I can turn this negative into a positive.’ Even when he was lying in the hospital bed, we were joking and laughing about things. For someone to maintain that type of attitude in the midst of all that is absolutely amazing.”

One year after his diagnosis, Bradley is cancer free — a year that also marks the second time he has broken $1 million in sales.

“With the year I’ve had with my health, that to me is bigger than any accomplishment I’ve had so far,” says Payne.

But Payne refuses to take all the credit.

“None of this would have been possible without the support from the administrators and staff at Kenway,” he says. “There hasn’t been one step, whether I’ve been healthy or ill, where I haven’t had major support — and they really stepped it up when I was sick.”