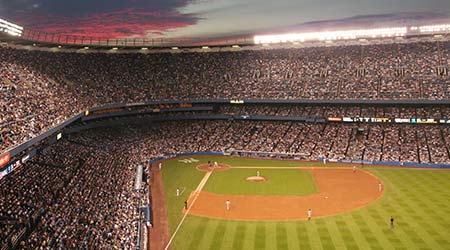 A recently released report by ESPN has found that of all 30 Major League Baseball teams inspected, Yankee Stadium was one of the worst when it came to food safety. According to an article on the Forbes website, the ESPN report analyzed nearly 17,000 food safety inspection reports from 2016 and 2017 conducted by the local health departments that oversee 111 arenas.

The report found that in 28 percent of the arenas, at least half of the outlets inside these venues incurred a violation that poses a potential threat for food-borne illness.

In the New York City area, for instance, findings were mixed for the six venues. Of all 30 Major League Baseball teams inspected, Yankee Stadium was one the worst. It ranked 102nd out of the 111 venues, with 79.07 percent reporting high-level violations.

In July of 2017, inspectors found hot food at improper temperatures and “filth, flies or food/refuse/sewage-associated flies” in food and/or non-food areas at a Legends level location.

The report also found inadequate cleanliness at one concession stand in July of 2016, noting an employee's outer garment was soiled with a possible contaminant.

Other even-poorer-scoring venues include the Spectrum Center in Charlotte, N.C., (92 percent), the now-closed Palace of Auburn Hills in Auburn Hills, Mich., (86.1percent) and the American Airlines Center in Dallas (83.08 percent).

The three stadiums with the lowest rate of violations are the NRG Stadium in Houston (4.44 percent), State Farm Arena in Atlanta (4.17 percent) and the Oracle Arena  in Oakland, Calif. (1.12 percent)