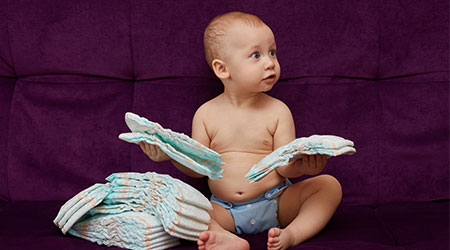 In a win form mom's and dad's everywhere, a television personality has co-founded a company that created a "self-sanitizer diaper changing table."

Addie Gundry, who is a personality on the The Food Network, co-founded Pluie so that children and caretakers alike can have a much better experience when forced to use the changing stations at public facilities.

"Out for lunch one day, my son had a dirty diaper and the women's restroom changing table was particularly dirty and uncomfortable," said Gundry, according to a press release. "Unsurprisingly, my husband had no option in the men's room, and that was my ah-ha moment. I thought why isn't there a better design that exists in every restroom?"

Pluie uses a patent-pending UV-C light system that's placed behind a protective panel to reduce germs, bacteria and viruses when it's closed and not in use. The company claims the light is capable of killing COVID, E.coli and influenza through a "photochemical reaction that damages their DNA."

In addition to the UVC-light system, the table feature a leak-proof cushion security strap and multipurpose handles.

"Businesses and public places need to focus on sanitation and cleanliness now more than ever," says Brittany Hizer, Pluie's co-founder and chief operating officer. "Pluie is not just a changing table, it is peace of mind. Simply put, every women's, men's, all-gender restrooms should have Pluie."

The fact is that many public restrooms lack diaper changing stations. Some cities, towns villages have began to mandate baby changing stations in all public men's and women's restrooms. One of those cities, San Antonio, created its mandate earlier this year.