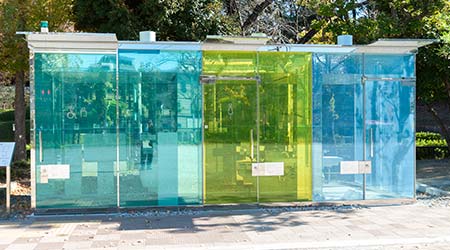 Many would view a life where they're paid to travel and see the world as part of their job to be a pipe dream. Something that would evoke a "I really get paid to do this?" question. But would the deal still be worth making if it were just researching public toilets? According to one woman, it really is a great gig.

The stories Australian social planner Katherine Webber would hear - how people were averse to using a public restroom, or how other people, particularly parents of young children, had difficulties when visiting them - became something of great interest to her. So much so that she has made it her professional mission to help improve public restrooms around the world, reports Vice.

Funded by a grant from the Churchill Fellowship, Webber began traveling the world in 2018 to study the many public restrooms society provides. Her hope is that she will gather the information she needs to help change restrooms everywhere so that they're more accessible to varying members of society. For example, those with disabilities or the people caring for people with disabilities often find that public restrooms do not provide the resources they need. Another issue is that a lot of private businesses don't allow delivery workers, gig workers or the homeless to use their restrooms, so when a public facility isn't available nearby, these people have no workable options. People who are transgender or don't identity with a particular gender also have a tough time using public restrooms that aren't gender neutral.

The public restroom scene in some cities has really impressed Webber, according to the story. She's a fan of the City of Portland, Oregon's efforts to create a more equitable public restroom offering. The city is also home to The Portland Loo, a portable, standalone restroom that's become increasingly popular throughout The United States.

Webber is also a fan of the public toilet setup in Berlin, Germany, which is implementing many new toilets throughout the city and recently completed a "large-scale mapping of public toilets."

Some cities have their issues, too. Amsterdam, Netherlands has a big public urination issues. One restroom in New York stands out to Webber because it not only smelled horrible and lacked toilet paper, but the doors to its stalls only covered the top half of a person's body - something she suspects was meant to deter public fornication or other illegal acts.

The ongoing pandemic has recently relegated Webber's research to just Australia. There she is advocating for more restrooms that offer resources that help the disabled, and federal funding for other improvements.