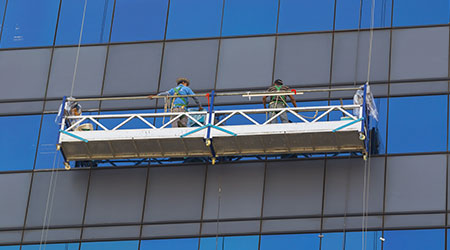 A pair of window washers suffered a terrifying day at work last week when strong winds forced the lift they were on to dangle widely atop the tallest building in Oklahoma.

Emergency responders arrived at Devon Tower just before 8 a.m. local time to find two window washers trapped in the dangling lift, which swung so violently that it struck part of the building, causing glass to break, reports Oklahoma’s News 4.

Both workers were rescued uninjured around 8:30 a.m., says the city’s fire department. But due to the danger, officials say they closed various streets surrounding the building, as well as a portion of its plaza, until the building could be inspected.

As frightening as this story is, window washing contracts are on the rise in some areas. According to earlier reports, the ever-booming San Fransisco Bay Area continues to see skyscrapers built to accommodate the needs of the growing tech industry, which just so happens to be smitten with shiny glass exteriors.

With only so many companies offering window cleaning service, now might be the time for building service contractors to test out the landscape. While some BSCs offer window cleaning, few offer service that goes beyond light window washing of entryways, which leaves a lot of potential money behind.

“They’re farming out the business and taking a very low margin on it, when they could have someone in-house do it,” says John Lombardo, global vice president of sales and marketing for Unger Enterprise, Bridgeport, Connecticut, said in a report by Contracting Profits.

Though the near incident in Oklahoma City makes the practice of cleaning windows sound dangerous, the truth is that many manufacturers have created tools that help clean exterior windows safely. Rickety lifts and flimsy ladders are becoming less common because of these products, which allow workers to clean multi-story buildings with their feet on the ground.