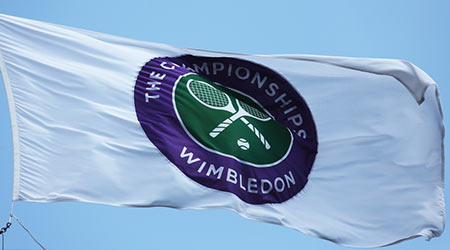 Members of the cleaning staff at Wimbledon say they ate food from garbage bins because they weren’t given enough money by the All England Lawn Tennis Club (AELTC) to buy lunch and dinner during their shifts. According to reporting from The Guardian, the staff also  crouched in corridors during their breaks because there was no allocated break room provided.

The housekeepers, who are employed by LSS, a subsidiary of Compass, worked daily shifts that regularly lasted 15 hours during the tournament, which finished on July 15.

According to one housekeeper, cleaning staff members who regularly work 15 hours a day receive £11.50 (roughly $15 U.S.) for food and get a one-hour break a day. She said many staff working shorter hours and less strenuous jobs are receiving up to £30 (roughly $39) for food.

Housekeepers at Wimbledon usually start the day at 8 a.m. They will be given an hour-long lunch break some time between midday and 3p.m., during which they can use the meal money given to them by AELTC. They have no other break until they finish at about 10 p.m.

Workers are reluctant to complain as they feel the blame will be passed on to a contractor, but the problem is with the AELTC, according to several housekeepers who have worked several tournaments.

An AELTC spokesperson said it meets annually with each of their major contractors to take their advice and agree on appropriate rates, shift rotations and rest days.