Why Some Hand Sanitizers Stink 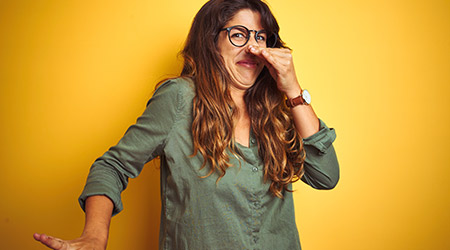 Not all hand sanitizers are created equally. It's not necessarily the germ-capabilities that make some better than others, but the scent, as many are discovering as of late.

As the most well-liked and trusted brands of hand sanitizer flew off the shelf do to the demand caused by COVID-19, people and businesses alike began seeking out anything that could be defined as a hand sanitizer. Unfortunately, upon first application of some of these hand sanitizers, users caught a whiff of a horrid stench that some find to be nausea-inducing.

Gregory Han, an online retailer specializing in bulk apothecary supplies, purchased an industrial size bottle of 70 percent ethyl alcohol-based hand sanitizer. Han writes in the New York Times' Wire Cutter that he regretted the purchase as soon as he smelled the hand sanitizer, which he describes as "the funky marriage of rotting corncobs paired with pungent notes of barnyard odors..."

Han isn't alone. A quick internet search shows that people are going to online forums such as Quora and Reddit to ask why the hand sanitizer they bought smells so bad. Even one of CleanLink's staff members recently used a hand sanitizer that he says smells like "warm tequila that somehow went spoiled."

So what's the reason for these terribly smelling hand sanitizers? Well, according to one of the experts Han spoke to, a rotten garbage or tequila-like scent is the result of the ethanol in the hand sanitizer, which can be made using corn, sugar cane, beets and other organic items. The stink occurs from using denatured ethanol, which costs much less to use than ethanol that has been filtered.