Why Regularly Cleaning Around Urinals Is A Must 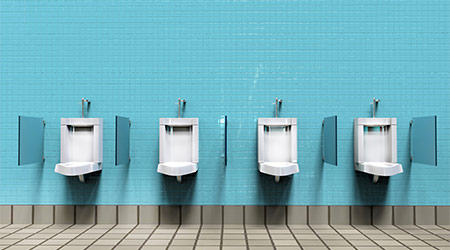 A study published in Emerging Infectious Diseases reports that traces of the pathogens that cause coronavirus can be found in an infected person's urine.

Further, another study, published by scientists from China’s Yangzhou University, finds that when urinals are used by people infected with the virus, traces of coronavirus can become airborne when the urinal is flushed. In the process, the pathogens can be inhaled by others in the restroom.

While the researchers did not conclude this will spread the disease, they indicted the potential is there.

Key findings of their study were the following:

- Within 5.5 seconds after flushing a urinal, airborne droplets are released potentially spreading the coronavirus.

- During this period, about 60 percent of the droplets generated by the flush have traveled past the urinals' exterior.

- Within this period, droplets reach a height of approximately 3 feet.

- The droplets form a trajectory, initially pointing directly at the urinal user.

- After six seconds, the airborne particulates travel higher, coating walls, partitions, and other surfaces around the urinal.

"Even if the droplets do not contain traces of the virus, they still may contain germs and bacteria that can be dangerous if inhaled or touched," says Matt Morison with Kaivac, developers of cleaning equipment engineered to fight the spread of infection.

Aware of this, the China News Service reports that staff members at some of China’s international airports are now spraying disinfectant liquids on the walls above, sides, and below urinals to help eliminate any pathogens on the walls.

"This type of cleaning and disinfecting should not be performed manually. That’s too slow and requires touching contaminated surfaces," adds Morrison. "Instead, using what ISSA calls "spray-and-vac" systems will do the job faster, and [will] certainly be safer for the cleaning worker.”