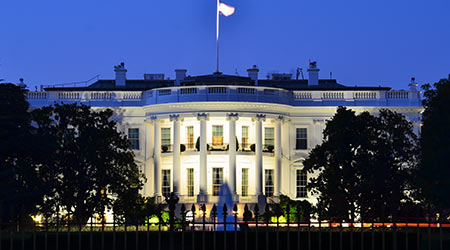 Much of 1600 Pennsylvania’s trash-collection process is kept tightly under wraps. According to an article in the Washingtonian website, the most basic details are hard to find.

The White House and the neighboring residence are like any other home or office, but some of the garbage from various departments and the Oval Office contain sensitive material—everything from off-the-record meeting details to the DNA on the president’s empty Diet Coke cans.

Previous administrations disposed of their trash in “burn bags.” According to a 2006 CBS News report, the Bush era used the bags to discard sensitive documents. According to the report, everything goes into the bag at the close of business.

The Trump Administration did not respond to initial inquiries from the Washingtonian about whether it uses burn bags, but eventually referred questions to the General Services Administration, which oversees day-to-day White House operations. The GSA spokesperson revealed that the Trump White House does, indeed, take out its trash and also recycles.

A burn bag is the common name given to a container (usually a paper bag or some other waste receptacle) that holds sensitive or classified documents which are to be destroyed by fire or pulping.

Destruction via burn bags is considered superior to shredding, because shredded documents may be reconstructed.

“Similar to our other GSA facilities, we use single stream collection for recycling, which means items are sorted offsite and recycled accordingly,” the White House statement said.

The White House briefing room and reporter-filing quarters have both trash and recycling bins, but it’s unclear which company deals with the refuse, and whether those collectors must pass a round of security checks, the article said.