White House To Be Deep Cleaned During President Switch 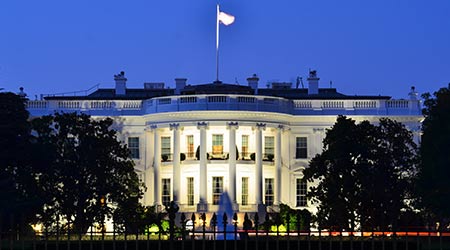 The White House will undergo a massive deep cleaning expected to cost hundreds of thousands of dollars during the looming switch of presidential administrations, reports CNN.

The news agency determined the cost for the work after reviewing the federal contract for the deep cleaning, which will span the entire stretch between the historic building's East and West Wing.

The specifics of the the contract are dazzling. Didlake, a Virginia-based business, who according to its website, makes it a priority to hire people with disabilities for work, will be paid $127,000 for inauguration day cleaning. Additionally, $44,000 will be paid out in a contract for carpet cleaning and another $115,000 for carpet replacement and installation.

The cleaning of the White House before changes in presidential administration has historically been done by the housekeepers, butlers and ushers that work at the White House. However, things will be different during the ensuing change in leadership because the Biden Administration wants a more comprehensive deep cleaning than has ever been given to the White House.

Scientific America reports the General Service Administration will supervise the deep cleaning of the White House. The plan is for the entire 55,000-square-foot space to be cleaned in around five to six hours.

A microbiologist told Scientific America that the General Service Administration should place the majority of its focus on the rooms that were last used by the Trump Administration before it moved out. The microbiologist said it would be a good idea to replace air filters and to use fogging technology and spray disinfectant.