Which Bathroom Stall Is The Cleanest? 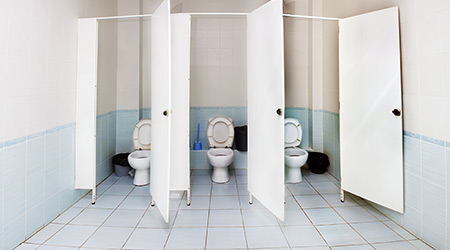 Researchers have discovered which public restroom stall is traditionally the cleanest, say to Reader's Digest reports.

According to studies, the middle stalls are to be avoided if possible. Apparently, people tend to choose the middle one because of the “centrality preference.” On the other hand, the first stall, which is the least used, is likely to be the cleanest.

After teaming up with a local custodian, a psychologist tracked how often the toilet paper was changed in each of four stalls for 10 weeks. Sixty percent of finished rolls came from the middle stalls, whereas only 40 percent came from those at the ends. This indicated that far more people used the stalls in the middle.

Add to this the results of a 2015 survey from New York Magazine that analyzed the preferences of men and women. It was determined that the majority of both men and women prefer to use the middle stalls, when they are available.

In cases when the middle stall is taken, men then lean toward the a stall closest to the door. Women go to the stalls farthest away.

Still, just because fewer people use an end stall, that doesn’t necessarily mean it’s cleaner. Reader's Digest suggests that those used less frequently might also be cleaned less often, so people avoid them.

There may be other factors in stall choice. An article on CleanLink reported that a 2016 survey by the restroom fixture manufacturer Bradley Corporation found that the most aggravating restroom situation is empty or jammed toilet paper dispensers, followed closely by partition doors that don’t latch, an overall dirty or unkempt appearance, and empty or jammed towel or soap dispensers.

Whatever the reason for the traffic patterns, custodial processes should always include proper cleaning and disinfecting of all surfaces in all restroom stalls. Where time could be saved is in tracking consumable stock and frequencies of replacement toilet tissue.