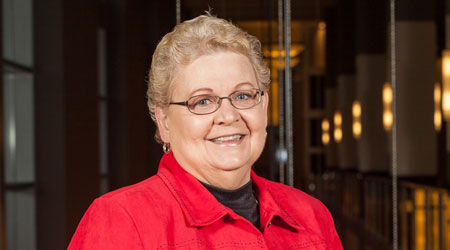 Millie Boss has long been synonymous with the Safe Step Pro Series brand of ice melters, as well as the penguins that symbolize the line designed specifically for jan/san professionals. During her 33-year Compass Minerals career that ended when she retired July 29, Boss became known as the face of Safe Step.

“She’s beloved, and she will be missed,” said her former boss, Michael Ross, national jan/san sales manager. “Millie sincerely cared about our customers, and dozens of them would stop by to see her at ISSA. Many of their children and grandchildren grew up with toy penguins from Millie. She always remembered their names and stories, and anyone who ever met Millie certainly remembered her.”

Boss joined Compass Minerals in 1984 as an administrative assistant at the Kenosha, Wis., manufacturing plant. She held several positions with increasing responsibilities during her tenure. When Boss retired, she served as the sales support specialist in the jan/san division. Her duties included sales support for Ross and independent sales representatives, maintaining and monitoring jan/san buying group programs, customer service and representing Safe Step Pro Series at industry trade functions.

In her new-found free time, Boss plans to return to the Louisville, Ky., area where she grew up to be closer to family and friends. Boss will join the company for one last trade show on Thursday, October 27, when she will be a guest of Compass Minerals at ISSA/INTERCLEAN.

“I have always enjoyed the relationships I developed with customers over the years – not just on a business level, but as friends. I will miss everyone, but I am looking forward to the life of a retiree,” said Boss. “I appreciate the opportunities I was given at Compass Minerals and am extremely grateful to all of the colleagues who helped me along the way.”