Water Conservation Is Crucial, Especially In These Seven Cities 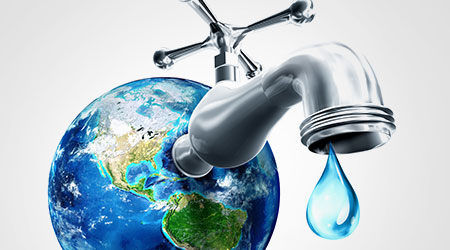 According to the United Nations, over one billion people lack access to fresh, drinkable water, and nearly 3 billion people have no access to water at least one month per year. And the problem is spreading.

The UN estimates that global demand for water will exceed supply by 2030. This means more cities will be in the same boat as Cape Town, South Africa, which has essentially run out of water.

The UN says the following seven cities are likely to run out of water by 2030:
1.   Sao Paulo. Home to 21.5 million people, a 2015 drought sent water reservoirs below 4 percent of capacity. Many doubt the city can survive another severe drought.

3.   Moscow. While it has ample access to water, pollution problems make as much as 60 percent of this water unfit for drinking.

4.   Cairo. The Nile provides nearly all of Egypt’s water, but is increasingly polluted and more fresh water is used for agriculture. The UN believes Cairo may run out of water in seven years.

5.   Mexico City. Today, most of the city’s 21 million people only have access to water a few hours per week. Water is imported, but as much as 40 percent of that water is lost due to Mexico City’s leaking water infrastructure.

“And don’t think US cities are immune,” says Klaus Reichardt, CEO, and founder of Waterless Co., manufacturers of no-water urinals. “Miami’s Biscayne Aquifer, the city’s main source of fresh water, is becoming filled with undrinkable sea water. This puts Miami on the list, too.”

While facilities in these cities and others around the world face some serious water challenges in years to come, newer technologies such as low/flow restroom fixtures, waterless urinals, and even new cleaning tools, equipment, and procedures are helping to reduce water consumption. For instance, cleaning floors with a hose — using 10 gallons of water per minute — is a thing of the past in most parts of the country.

The same goes for floor mopping. There are alternatives to conventional mopping, such as the use of trolley buckets that dispense a precise amount of water/chemical directly onto floors and then vacuum it up.

Plus, newer, low-moisture carpet extractors and floor machines are helping to reduce water consumption as well. In other words, the jan/san industry is doing its part to use water more responsibly.