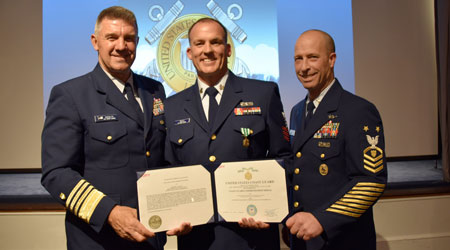 Gould, who is also the WAXIE Santa Ana Regional Sales Manager when not on deployment, won local and regional REPOY awards before achieving national recognition. The REPOY program recognizes exceptional men and women who serve in the Coast Guard’s enlisted workforce and are chosen for their work ethic, conduct, and community-service contributions.

"Mike is a leader whose values include honor, sacrifice, courage and commitment. Selfless acts are the foundation of his character. He gives of himself freely to those in need and those he protects," asserted Alice Sawaya, Vice President and General Manager of WAXIE Santa Ana.

A U.S. Coast Guard Reservist since 2012, Gould just returned from a nine-month deployment where he patrolled the waters around Guantanamo Bay, Cuba as part of the Port Security Unit 311.

At the ceremony, Gould was praised for working long hours as a tactical coxswain, his role as the unit’s primary professional development coach for third class petty officers and water survival training program master, as well as the training petty officer for members working to attain their coxswain qualifications.

Along with Gould’s family, WAXIE’s President and COO Jeff Roberts attended the award banquet as a representative of Gould’s "civilian employer."

"Mike is an outstanding example of service first — both to his country and to others — and generosity. He made personal sacrifices to be away from his family for nine months. Mike is the epitome of the U.S. Coast Guard motto is ‘Semper Paratus’ which means always ready. All of us at WAXIE are very proud of him," Roberts commented.

During his acceptance speech, Gould thanked his PSU 311 shipmates and stated, "I believe the key to any success I have achieved is because someone first helped me. I will always try to offer guidance to others and assist those who ask."

For more information on this award from the Coast Guard, click here.