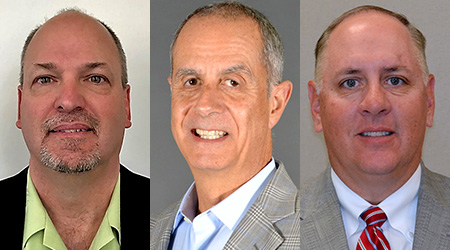 WAXIE Sanitary Supply, San Diego, promoted three key employees: Rick Jones, Steve Thomas and Eric Frei. With combined experience of more than 60 years in sales, management and operations, the three of them have played a pivotal role in shaping WAXIE’s impressive growth over the past couple decades.

Jones began his career with WAXIE in 1997 as a sales consultant and quickly worked his way into a new role as sales manager. After having shined early on, Jones accepted the sales management position in 2006. Within another five years Jones was again promoted, this time as general manager of the Seattle Branch. During that time he also oversaw Portland and Alaska, guiding the region to explosive sales growth.

In his new role, Jones will continue to mentor and develop his people, serving to further instill his team with the tenacity and passion he has brought to WAXIE for the past 21 years.

Like Jones, Thomas began his career with WAXIE as a sales consultant. During his first 10-year tenure with WAXIE, he moved from sales consultant to sales manager and eventually regional sales manager. During this time, Thomas had the foresight to hire five team members who went on to become successful leaders within WAXIE.

Thomas left WAXIE to pursue other endeavors but eventually came back as the director of corporate accounts implementation in 2008. In 2009, Thomas was promoted to director of corporate accounts and contract services where he successfully aligned the Contract Services and Corporate Accounts departments. In 2012, he began to directly oversee the Corporate Accounts Directors, where he quickly built a collaborative and efficient team. Thanks to Thomas, his team has been able to build strong relationships with sellers while growing the company through national accounts. It is expected that Thomas will continue to successfully drive growth for WAXIE.

Frei began his career at WAXIE in 1996, and in 1998 he became the sales manager of WAXIE’s Phoenix branch. Frei drove rapid growth in Arizona through his commitment to developing his team. After the Phoenix branch doubled its sales team, Frei was promoted to regional sales manager to further lead the effort. In 2013, Frei was promoted to general manager to oversee all Arizona sales and operations. Not surprisingly, the Arizona branch has flourished since then.

Frei’s passion for serving customers and his fellow employees is impressive and will continue as he becomes the new vice president, general manager of the Arizona region.